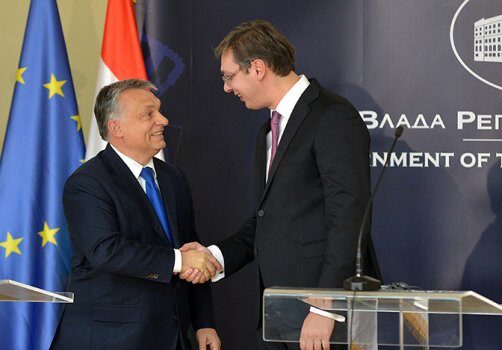 LONDON – Hungarian Prime Minister Viktor Orban and Serbian President Aleksandar Vučić are not interested in liberal democracy or media freedom, and the European Union should defend its principles and cease to overlook the co-operation of the two leaders, concludes a British Guardian column.

Columnist Natalie Nougayrède compared Orban and “his close friend Vučić”, stressing that in their countries “they both pander to the nationalist sentiments”, while trying to “preserve functional ties with important actors within the EU”.

“Orban and Vučić are perfect (political) chameleons, (…) and their greatest strength lies in recognizing the changing attitudes of the public opinion and adapting them to new circumstances,” the text states.

The author reminds that their transformations had different directions, that Orban became the “most vocal representative of nationalist-populist politics” from the symbol of democratic transition in his country, while Vučić became a “seemingly reasonable pro-European” aout of the “devotee of Serbia’s war politics of the nineties.” The root of both changes lies in the need for political survival and entrenchment, the column continues.

The importance of these two politicians is recognized by the author in the appeal of the current Hungarian political climate to other European right-wingers, and in the importance of Serbia for the stability of the Balkans, the “Europe’s strategic, vulnerable underbelly”.

The EU as the only mechanism for preventing nationalism and demagogy in this part of the continent has its own soft power, a “pressures and incitements system” that must be used as soon as possible to prevent democratic backsliding or the “revision of the borders as a new potential crisis”.