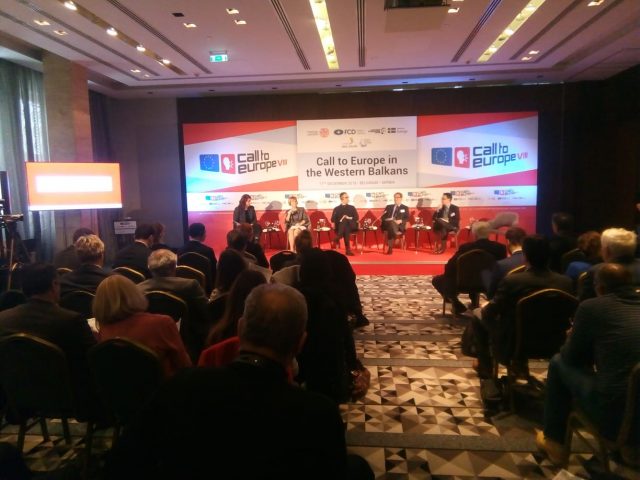 BELGRADE – International conference “Call to Europe in the Western Balkans” was held yesterday in Belgrade. The conference was jointly organized by the Foundation for European Progressive Studies (FEPS) from Brussels, Center for Democracy Foundation and Olaf Palme International Center in cooperation with the Jeaun Jaurès Foundation (France) and the Foundation for Development of Parliament. The conference gathered politicians, experts, representatives of civil society and media from the Western Balkans who discussed current and future political processes in the European Union.

The conference was opened by Nataša Vučković, Secretary General of the Center for Democracy Foundation, who pointed out that the main issues in the Balkans have not yet been solved. She said that there is a democratic deficit and that “democracy, the rule of law and corruption are a more present on paper than they are in practice”. “Citizens should be the ones bringing change, but we still need a partnership with Western Europe to motivate them,” concluded Vučković.

Charlotte Billingham, Executive Advisor of the Foundation for European Progressive Studies, addressed the audience and said that the conference was a great opportunity to hear the voices of others outside of Brussels.

She referred to the challenges for representative democracy in Europe, stressing that we live in a time of change and that we need to adapt. “We need a change of the paradigm in the banking sector, government transparency, fight against corruption, as well as in terms of social and environmental issues,” Billingham said and added that “democracy is as resilient as are resilient the people who live in that democracy.”

National Coordinator of the Olof Palme International Center, Danilo Milić said in the opening speech that he saw conference agenda and questions that he himself can’t answer, but he expressed hope that participants of the conference will be able to do it. Milić also spoke about t the situation in Sweden, saying that right-wing populists are on the rise and that the left-wing worldview of the world is at stake.

European Elections and the Western Balkans

“We have political instability in Western Europe. We have forgotten that there cannot be a social policy which relies on the left and the right at the same time”, said Sébastien Gricourt, Political Counselor at the Jeaun Jaurès Foundation. “In the Western Balkans, we have leaders who are betting on the end of the European Union, so they can stay in power,” Gricourt added.

Dr. Vesna Pusić, current MP and former Foreign Minister of Croatia, pointed out that, at the moment, the European Union has the most support in the United Kingdom. “Only when you realize what you are losing, you want to keep it”, said Pusić, adding that fear politics has returned through the front door.

The 2019 European Parliament elections show that there is only one international movement that is well connected, and that is extreme right. “They have a clear and explicit goal – to insert a large number of populists into the European Parliament”, concluded Pusić. She believes that today’s generations have “inherited Europe” and that there isn’t any instrument to get them acquainted with it.

Analyst and journalist of the newspaper Politika, Boško Jakšić pointed out that there is a trend of populists winning elections. “We can see that their numbers are increasing, which can confuse the Western Balkans, where there is a tradition of choosing authoritarian and nationalist leaders, “ said Jakšić.

“In the past years, Serbia tends to decrease its alignment with Foreign and Security Policy of the European Union and this leads to scepticism in the European Parliament. If Serbia does not show a more proactive approach, Chapter 31 will be problematic in the future”, said Natan Albahari, Program Manager of the International and Security Affairs Centre – ISAC Fund.

Challenges and Threats to Democracy as a Common Issue

Second-panel discussion, named “Challenges and Threats to Democracy as a Common Issue” was also moderated by Ljubica Gojgić.

Democracy is the subject when it is present and also when it is not, said Dr. Dragoljub Mićunović, Serbian MP. “When it is not present, it lives in memories, which means that it will rise again. It hasn’t gone because it didn’t have strength, but because it didn’t have friends,” added Mićunović. Parliament, the judicial system and public opinion are the three pillars of democracy that are devalued by the current system. In Mićunović’s opinion, when all three pillars collapse, democracy can’t breathe and then tyranny arises.

Svetlana Vuković, Advisor for International Cooperation in Montenegrin Democratic Party of Socialists, thinks that social democracy is still present in Europe, and especially in Montenegro where citizens voted for this option. “I disagree with the assessment that Montenegro is a captured state. In the end, citizens are those who decide in elections. Certainly, there is corruption at various levels, but we are working on it,” said Vuković.

“Strong institutions are important for stability and policy implementation – they are here for public interest, not private ones. Public interest shouldn’t be a concern of one man.”, said Dr. Eralda Cani, Professor at University of Tirana’s Law School, adding that in the Western Balkans more and more private interests are realized masked as public ones.

Journalist of Vreme weekly, Andrej Ivanji said at the beginning of his speech that “European Union is falling apart in front of our eyes.” “I am completely pro-Europe, but I am also completely disappointed in the European Union because it failed expectations. What message EU sends when it is tapping Vučić’s on the shoulder only for solving the Kosovo issue or when it allowed placement of barbed wire at its border, asked Ivanji.

The Social impact of EU Integration

The last panel – “The Social Impact of European Integration in View of Attempts to Socialize the European Semester” – dealt with the social dimension of European integration and the recently adopted European Pillar of Social Rights. The moderator of this panel was Bojana Ružić, Project Manager of the Workers Samaritan Federation.

Sonja Lokar, Former Executive Director of the Central Eastern European Network for Gender Issues, said that, when Europe is in crisis, austerity measures which affect poorest and the middle class are imposed. Prosperity period occurs only when the debts are repaid, and social tensions usually occur between these two periods.

“Today in the European Union we are talking about enlargement fatigue, and in the Western Balkans, we are talking about the fatigue of European reforms. In that sense, we need a new instrument for communication and exchange of experiences between citizens and civil society,” said Katica Janeva, Director of ALDA Skopje Office. She emphasized the importance of the involvement of citizens and local authorities in the process of European integration.

“The economic growth mantra is repeated throughout Europe,” said Ivan Vujović, Member of the Social Democratic Party Presidency in Montenegro, but he also believes that it doesn’t affect the lives of the average citizens. Vujović added that all the issues that are were discussed at the conference are “put in a completely different track and out of the public’s focus” by all governing structures.

Ivan Sekulović, Policy Advisor at the Center for Democracy Foundation, referred to the labor rights in Serbia. He pointed out that recent reports show a low level of social justice since many laws that are being adopted were created as an initiative of the employers, not employees.

[EWB Interview] Appathurai: Belgrade-Pristina Dialogue the only path for Kosovo to join NATO

EU officials send another letter to Haradinaj, reject his assessment of dialogue’s failure