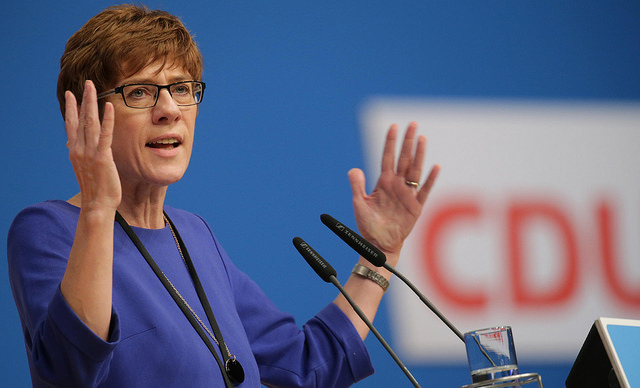 BERLIN – Annegret Kramp-Karrenbauer, the leader of Germany’s Christian Democrats, on Sunday issued a response to French President Emmanuel Macron’s calls for a stronger Europe, presenting her own proposals to deal with populism, economic uncertainty, international security and migration.

She echoed some of the plans set out by French President Macron, there were some issues on which she took a different stance. Even though Kramp-Karrenbauer said she agrees with the French president that “Europe must get stronger” she thinks the answer is not to create more European institutions and transfer power away from national governments.

“A new Europe cannot be founded without the nation states: They provide democratic legitimacy and identification,” Kramp-Karrenbauer wrote, adding that member states formulate and bring together their own interests at the European level. This is what gives Europeans their international weight.”

European centralism, European statism, the communitization of sovereign debt, a Europeanization of social systems and of the minimum wage would be the wrong way are the terms the chief of CDU does not want. In her response she presented number of proposols.

Therefore, Kramp-Karrenbauer wrote number of proposals: “EU should better protect its external borders, EU should have a permanent seat on the UN Security Council, the European Parliament should focus its work in Brussels, rather than alternating with Strasbourg, Europe should try to shape a version of Islam that is compatible with its values — imams and teachers trained in the “tradition of enlightenment and tolerance”
EU officials should no longer be exempt from national income tax, a European Security Council to involve the United Kingdom for foreign and security policies…”

Richard Moore met with the negotiating team of Kosovo in Pristina