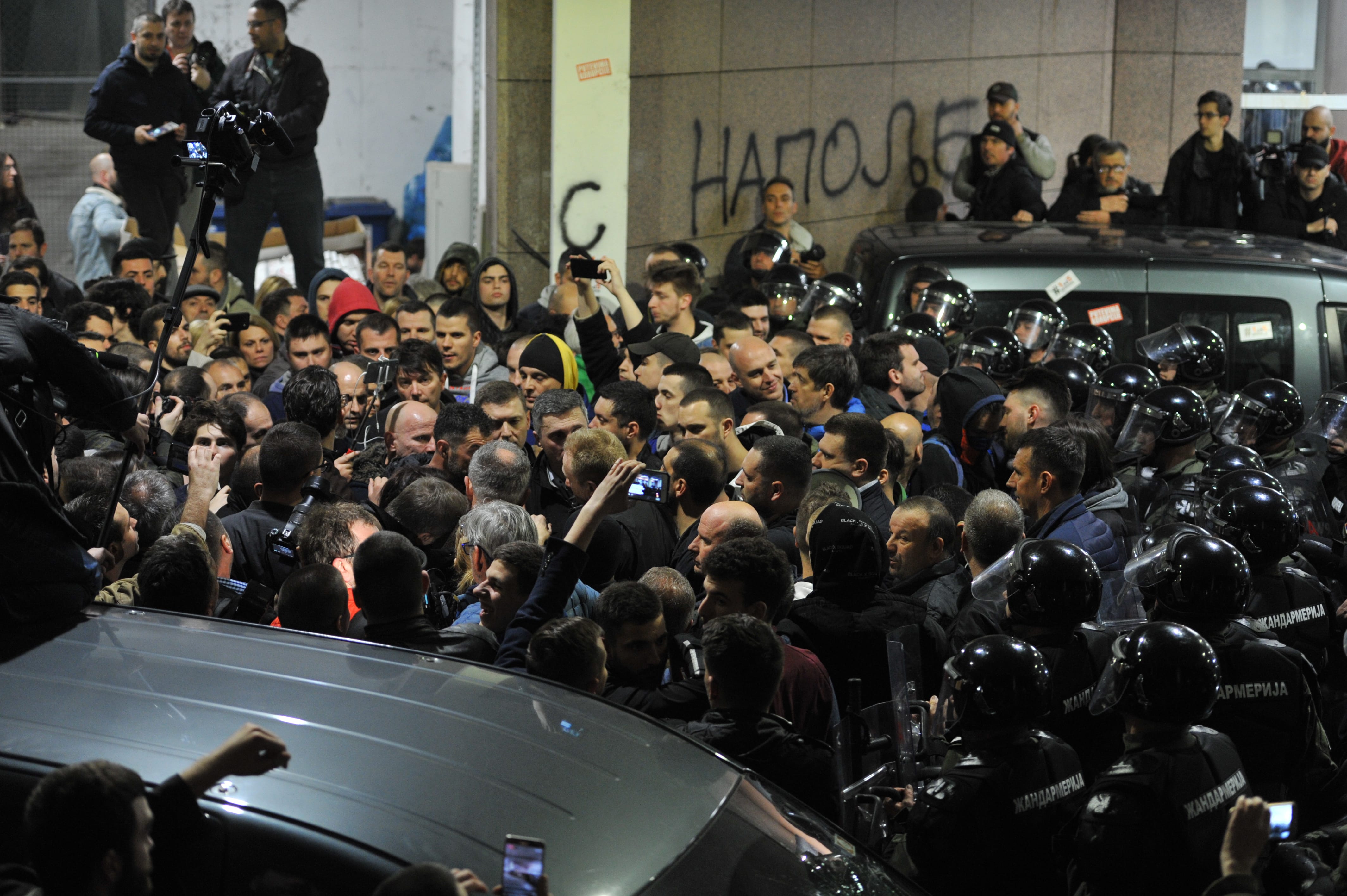 BELGRADE/TIRANA/PODGORICA/- Anti-government protests have continued over the weekend in the capitals of Serbia, Albania and Montenegro, as well as smaller places in these Western Balkan countries. While the protesters in Albania once again clashed with the police, Saturday evening marked the first time that the preventive force was used against the participants of Belgrade demonstrations, who stormed the building of the country’s public broadcaster.

Protests in all three countries are aiming to overthrow the ruling parties led by President Aleksandar Vučić, Prime Minister Edi Rama and President Milo Đukanović respectively. The regimes are accused of corruption, suppression of democracy and media freedoms as well as unsatisfactory economic situation.

On 16 March, dozens of demonstrators, lead by opposition politicians Boško Obradović and Dragan Đilas, entered the headquarters of Radio-Television of Serbia (RTS), bypassing the security and demanding an opportunity to address the viewership live. Since the protests have begun in early December, none of the organizers has been invited to RTS, which is still the most watched television channel in the country.

There were no acts of violence, and the police managed to remove the citizens from the building after several hours, with some accusations of disproportionately harsh treatment surfacing on the social networks. Only one person was arrested for assaulting a police officer.

President Vučić announced that he will be addressing the incident during an extraordinary press conference on Sunday at noon. Breaking from the traditional protest walks on Saturday, the organizers announced in return that they will be staging protests in front of the Presidency at the same time, demanding Vučić’s resignation.

Earlier this week, the parties gathered in the Alliance for Serbia, the country’s strongest opposition coalition, gave Vučić and other high state officials a month to resign from their offices, or face demonstrators from all across Serbia who will gather on 13 April in Belgrade if the demands are not met by then. This is the first protests explicitly organized by the opposition politicians, who have started to address the attending citizens more and more every week, taking the role from the popular public figures and representatives of civic initiatives.

In the meantime, protests in Albania have been openly organized by the opposition from the start. Democratic Party MPs, along with several other opposition parties, have resigned from their parliamentary posts in February. DP’s leader Lulzim Basha has been at the forefront of the demonstrations from their start.

On 16 March, protesters in Albania once again tried to storm the offices of Prime Minister Rama, and then the national parliament. They were stopped in the latter attempt by the police, who threw tear gas and used water cannons to disperse them. At least one protester was incapacitated, Balkan Insight reported.

Basha announced that various forms of citizen’s resistance will be held across the country during the following days. Both US Embassy and EU delegation to Albania condemned the violence, and urged the organizers to prevent it from escalating during future protests.

In Montenegro, on the other hand, the protests are still almost exclusively organized by the citizen movements, and not by opposition parties. This Saturday again witnessed thousands of people (in a country of 620.000) gathering to demand the resignations of the most senior state officials, beginning with the President Milo Đukanović, who has been in power since 1989.

The demonstrations have been sparked by the numerous affairs that have seemingly revealed the extent of corruption of the ruling party. Under the hashtag “Resist”, they are taking place every Saturday, and the next ones are already announced for 23 March.