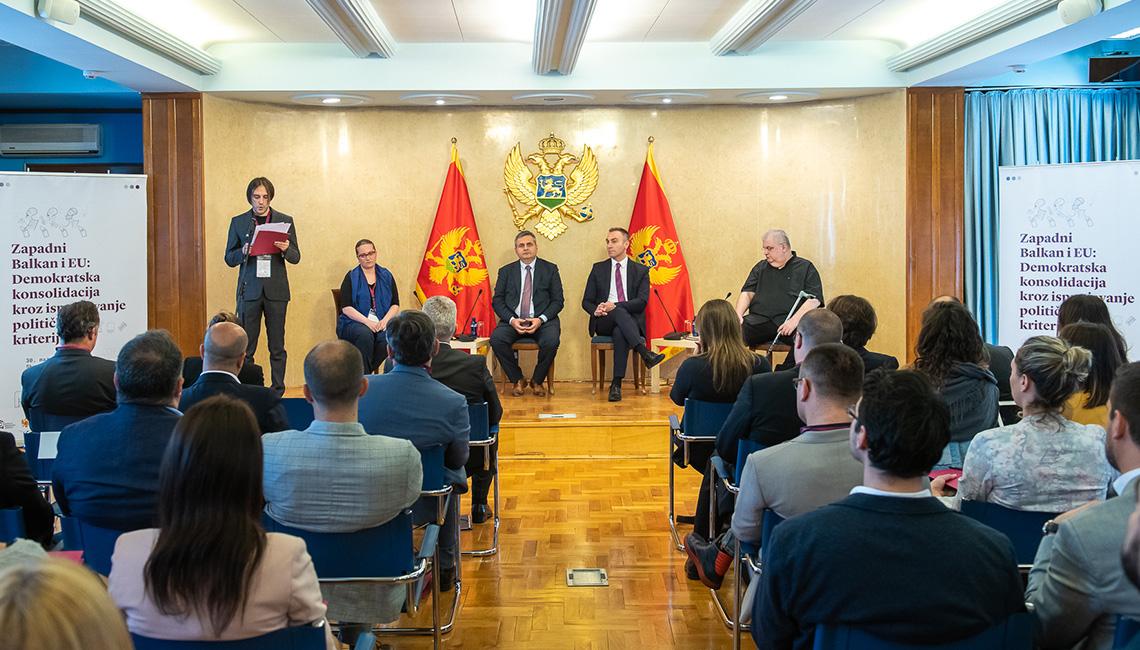 PODGORICA – For the Western Balkans words of praise in progress reports are not enough, it needs the European Union that rewards individual achievements of reforms, it is one of the conclusions of the conference organised by the Centre for Democratic Transition from Podgorica, organised on Thursday, May 30.

The day after the publication of the European Commission 2019 Enlargement Package, the President of the European Integration Committee of Parliament of Montenegro, Slaven Radunović, pointed out that this document should contain less diplomatic vocabulary and more unambiguous indication of violations of basic European values and principles of the European Union.

Speaking about the balance of power in this country, as one of the pillars of every liberal democracy, he noted that there was a serious disruption through the dominance of the executive branch over all segments of political life.

“This situation led to the capture of institutions and the lack of conditions for building a democratic culture,” Radunović said.

The Chairman of the Committee on European Affairs of the Assembly of North Macedonia – Artan Grubi, was much more optimistic about the progress made so far in meeting the political criteria for the EU membership and future reform processes.

In the past year and a half, through the resolution of bilateral disputes with neighbours and the recent reform of the security service, North Macedonia has made significant progress.

As part of the reform efforts being undertaken in this country, he stressed that the committee he chaired, initiated the adoption of a law on the vetting of judges and prosecutors, created on the basis of the ongoing process in Albania and modelled on the experience in the fight against corruption in Latvia.

However, when it comes to the question whether the European Union will respond to this reform process with the date for the start of negotiations at the meeting of the Council of European Union in June, he was much more careful.

“The European Union should reward the reform process, it is not possible for us to hit the target that it is moving,” Grubi stressed.

The Chairman of the Committee on European Integration of the National Assembly of Serbia Nenad Čanak, expressed the view that the European Union, as a peace project on the ground of Europe, should jointly receive the Western Balkans into its membership, because that move would ease bilateral problems.

The legitimacy and integrity of the elections have a significant impact on the work of political institutions and therefore, work on their empowerment is necessary – it is the common position of the Center for Democratic Transition (CDT), the Center for Research on Transparency and Accountability (CRTA), the Foundation Metamorphosis and the Citizens’ Association Why not?, at the presentation of the publication “Democracy without Institutions – New Balkan Invention”.

Milica Kovačević of the Centre for Democratic Transition, as the biggest problems in meeting political criteria on the road to the European Union, sees in the absence of a division of power and suspicion among citizens in the regularity of the electoral system.

“The problem of suspicion in regularity was reflected in the boycott of the Parliament of Montenegro, since the elections in 2016 until the end of last year, which has disabled the key democratic institution,” she said, adding that with regard to the fight against crime and corruption there was progress, but it is necessary to work on the prevention of these phenomena.

In the area of public administration, Kovačević concluded that progress has been made and that was recognised by the European Commission, especially in the area of policy planning and the establishment of employment mechanisms, but efficient operationalisation and depoliticisation of institutions is necessary in order to make the best use of the professional resources in Montenegro.

Bardhyl Jashari of the Metamorphosis Foundation said that there was visible progress in North Macedonia in the past year and that citizens can feel it. Given that North Macedonia has a candidate status since 2005, a lot of efforts have been made to harmonize legislation but, he concluded that the country needs to do more when it comes to the implementation.

“For North Macedonia, restoring the trust of citizens in institutions – parliament, government, the judiciary and, of course, the media is crucial,” Jashari explained, adding that institutions must become not only more efficient but more impartial.

In Serbia, the problem is that reform processes are initiated for the purpose of daily political needs and as an ad-hoc initiative, says Pavle Petrović from the Centre for Transparency and Accountability Research (CRTA).

“Citizens are unable to acquire information on the work of public institutions, while independent media are limited to online platforms and portals, and the Electronic Media Regulatory Authority (REM) does not perform its role adequately,” Petrović said.

Darko Brkan from Why Not citizen association noted that the requirements of the European Union concerning the fulfilment of the conditions for getting the candidate status for Bosnia and Herzegovina are growing and pointed out that he is not optimistic about their near completion. The European Commission recognised in its report the problem of the electoral system in Bosnia and Herzegovina, which, as he said, was subject to manipulation.

“Enlargement is the most important tool of the EU’s common foreign policy, but the Union is currently focused on finding a solution to its problems, such as Brexit and institution-building after the last European elections,” says Joana Popeska of Global Focus from Romania.

She stressed that the European Union should reward countries that meet the criteria, and from the experience of accession of Romania, she said that it is better that certain reforms are slower but more sustainable in the long run.

Hahn: EU needs to endorse the start of negotiations before summer

📌Members of the EU need to make up their minds – do they want to enlarge or do they just want to pretend? @BiEPAG… https://t.co/8iXLD3gDLT

Reply Retweet Favorite
📌It is evident that the more powerful citizens can avoid justice and that the rule of law does not apply to all cit… https://t.co/RkNIGz6625