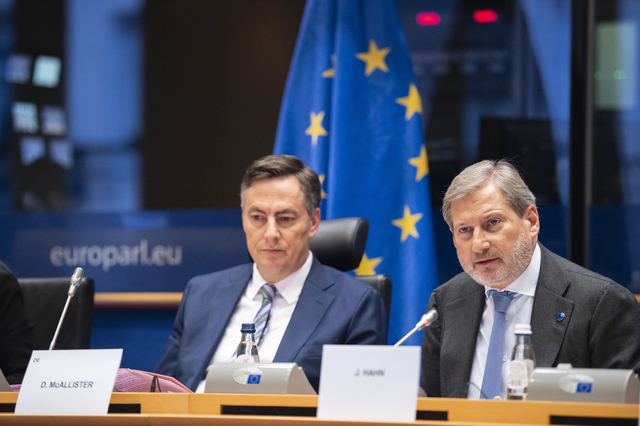 BRUSSELS – The greatest incentive for the Western Balkans is the prospect of joining the EU, stressed the outgoing European Commissioner for Neighbourhood Policy and Enlargement Negotiations in European Parliament today.

Appearing in front of the Foreign Affairs Committee (AFET) for the final time as the Enlargement Commissioner, Hahn reflected on the enlargement policy in the past five years, focusing on its most recent challenges.

“By failing to take a decision (on Albania and North Macedonia), our credibility has taken a hit and I hope that decision will be reviewed. The overwhelming majority of member states have for years pushed for opening the talks. It is important that we continue the dialogue with the different member states”, Hahn said.

He underlined that the Western Balkans is not a suburb of Europe, but a part of Europe, and that the EU cannot let this brain drain continue, because it would undermine societal development and security in these countries.

“Let’s not fool ourselves. These reforms will not happen without the pressure of the EU. They are tackling the reforms, maybe not as fast as we want to, but they are doing it because of the EU pressure”, the Commissioner said.

Reflecting on the statement of EC President Jean-Claude Juncker that there will be no enlargement during his Commission’s mandate, Hahn said that this was largely misunderstood.

“We sought to make it clear from the beginning that there are European prospects for all the six countries that have not joined the EU”, he said.

Hahn used the opportunity to highlight the achievements of the European integration process of the Western Balkans during his mandate – opening of accession negotiations with Serbia, finalisation of Stabilisation and Association Agreements with Bosnia and Herzegovina and Kosovo, launch of the Berlin Process, billion Euros of annual investments in the region per year, increase of intraregional trade and the frequency of the meeting between the leaders of the region, as well as resolution of bilateral disputes of North Macedonia and judicial reform in Albania.

“There have been failings too, missed opportunities, no doubts about that. But without this clear European prospects, none of the achievements would have been possible. We have seen this in the initial response to the failure to give green light to Albania and North Macedonia. I hope that this will be reconsidered in the near future”, Hahn concluded, adding that he believes it to be a mistake of historic proportions.

Picula: Montenegro needs to continue to confirm that its place is in the EU

Caught in a vicious circle: how corrosive capital perpetuates state capture in the Balkans