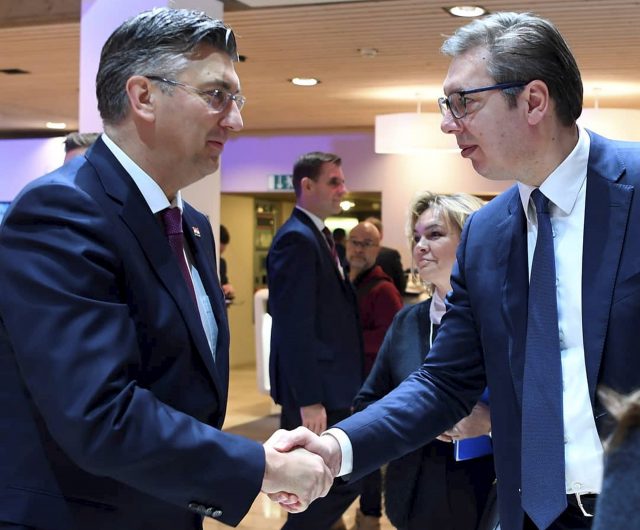 DAVOS – New enlargement methodology and opening of accession negotiations with North Macedonia and Albania were the key topics discussed during yesterday’s panel “Strategic Dialogue on the Western Balkans” at the prestigious World Economic Forum in Davos, Switzerland.

“I am disappointed that the EU members were not able to reach the decision on opening of accession negotiations with North Macedonia and Albania last year”, emphasised the Prime Minister of Slovenia Šarec at the panel, Dnevnik reports.

He assessed that without the implementation of the enlargement policy, the debate on the future of Europe will not be comprehensive, and that the Western Balkans is an important partner in the fight against organised crime and corruption, as well as management of migration.

Prime Minister of Bulgaria Boyko Borisov stressed that, even though there are many regional initiatives which promote political, economic and social stability in the Western Balkans, they cannot make up for the importance of the European integration, MIA reports.

During the panel, President of Serbia Vučić answered the question of a Bloomberg journalist on whether he expects progress when it comes to EU enlargement. He emphasised that “the main topic in this meeting was the opening of accession negotiations with Albania and North Macedonia, which Serbia supports and hopes it will happen by the EU-Western Balkans Summit in May”. Vučić added that it would be good for Serbia to find out what the position of the EU is, and “if we need a diversification of investment sources, as well as economic cooperation”.

On the sidelines: Plenković with Vučić and Thaçi

Prime Minister of Croatia Andrej Plenković met with the Presidents of Serbia and Kosovo on the sidelines of the World Economic Forum yesterday.

“Kosovo expects that the well-deserved decision on visa liberalisation be made during the Croatian Presidency of the Council”, wrote Thaçi on his Facebook account after meeting with Plenković.

Plenković, on the other hand, tweeted that the topics of political and economic cooperation, as well as the priorities of Croatian Presidency of the EU, were discussed at the meeting.

President of Serbia Aleksandar Vučić assessed that the meeting with Plenković was “open and enjoyable”. “We touched upon the relations between Serbia and Croatia, and I believe that there is more trust and optimism”, Vučić said, Fonet reports.

The annual meeting of the World Economic Forum in Davos gathered political representatives and businessmen of the 117 countries, among whom were the Chancellor Angela Merkel, President of the United States Donald Trump and President of the European Commission Ursula von der Leyen.