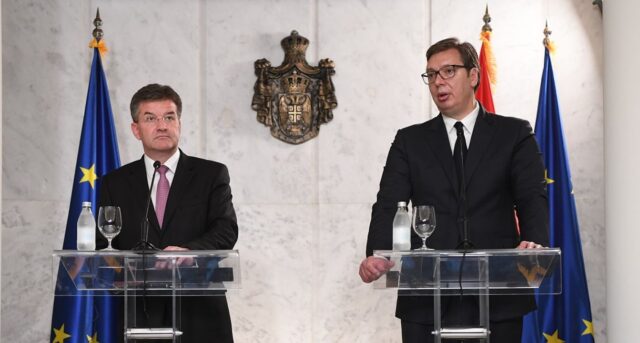 BELGRADE – EU Special Envoy for Belgrade-Pristina Dialogue Miroslav Lajčak said yesterday that he is personally ready to continue the dialogue under the auspices of the EU, without delay and in order to a comprehensive agreement that will normalize relations, resolve unresolved issues, be sustainable and acceptable to region and EU member states, FoNet reported.

“As a mediator, I am not here to push into a certain agreement at any time but to help the sides reach an agreement that will work for both countries and both citizens”, said Lajčák, who congratulated Vučić on his election victory.

He also said that he believes that the dialogue can continue as early as July, reminding that Serbia’s place is in Europe and that it largely depends on resolving the issue with Pristina.

“Serbia is part of Europe. Your problems are ours. But you know that your path is connected with dialogue,” Lajčák said adding that he wants Serbia to progress in the dialogue.

He pointed out the importance of dialogue and said that he had discussed expectations with the President of Serbia, Aleksandar Vučić.

Vučić stated that Serbia, in accordance with the decision of the United Nations General Assembly, fully supports the dialogue between Belgrade and Pristina under the auspices of the EU and that Serbia’s commitment to the European future cannot be separated from European patronage in those talks.

He added that Serbia recognises that Lajčák – with his authority, knowledge and commitment – can guarantee objectivity and impartiality in that process.

Vučić concluded that Serbia appreciates the efforts of the United States, but that the continuation under the authority of EU is expected, because that dialogue is related to Serbia’s European perspective.

Lajčák also met with the Prime Minister of Serbia Ana Brnabić and confirmed that the EU will insist on the implementation of all previous agreements, and added that he sees dialogue as a platform for resolving all open issues.

EU Special Envoy for Belgrade-Pristina Dialogue said Brussels’ readiness to mediate talks between Belgrade and Pristina is a significant indicator of the importance of the Western Balkans, and its stability, prosperity and European perspective are high on the EU’s agenda.

Ana Brnabić reiterated that Serbia is ready for the soon continuation of the dialogue between Belgrade and Pristina under the auspices of the EU.

“Belgrade appreciates all the EU’s efforts in resolving the issue”, she said, adding that the first message from Serbian President Aleksandar Vučić after the parliamentary elections was related to speeding up the European path and reform processes.

Ana Brnabić characterized as a positive signal the readiness to place the implementation of the things agreed in the Brussels Agreement in the dialogue agenda.

“Serbia’s European path and the continuation of reforms, as well as cooperation in the region, will be a priority for the next government”, said Ana Brnabić.

Stoltenberg: Meeting of Vučić and Thaçi at the White House is the beginning of the end of the dispute