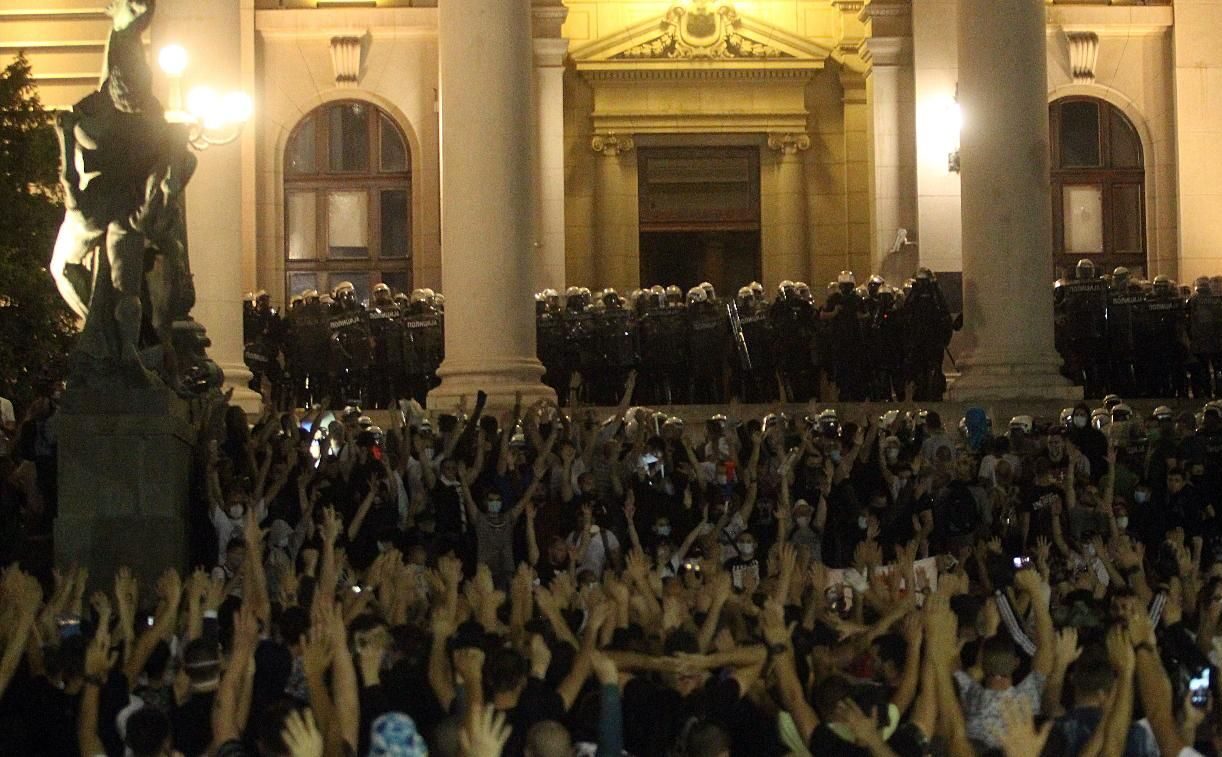 Protest in front of the National Assembly on 10 July; Photo: FoNet

BELGRADE – The fight against the Corona pandemic is clearly back on the agenda in the Western Balkans, but the robust measures seen at the beginning of the crisis in March and April are still not being re-introduced. In the meantime, political polarisation is continuing in the region, propped up by elections in some of the countries, highlights the fourth edition of the “Democracy and the State of Emergency” report released by the Friedrich-Ebert-Stiftung earlier this week.

“The reports in this volume clearly show that in all countries under observation the authorities have initially decided to abolish or loosen key measures that were adopted to fight the spread of the COVID-19 pandemic and that were affecting the political and civil rights. However, the reopening was accompanied by the spike in the number of infected cases, which is why some measures affecting civil liberties were re-introduced (for example, restrictions on public gatherings and even locally limited curfews). The measures are not as strict as during the previous lock-downs because there is no support for it among the citizens”, reads the introduction of the report covering all Western Balkan countries, as well as Croatia and Slovenia, individually.

In Kosovo, for example, during June, numbers of infections escalated beyond the highest peak of infections during lockdown and the restrictive measures, exceeding 140 per day.

“The rise in infections during June has raised questions about the feasibility of the de-confinement plan, but also on the logic behind the previous almost three-month lockdown”, the report reads.

The situation has been specific in Serbia and North Macedonia, where parliamentary elections were scheduled for 21 June and 15 July, respectively.

Serbia was, in fact, the first European country to hold a national election following the lockdowns introduced on the continent in mid-March. The atmosphere was already heating up around the parliamentary and local elections, marked with uncertainties around health and potential influence on further spreading of COVID -19 epidemics, report reads.

“Despite continuous reassurances from the Crisis Headquarters and President Vučić that the Corona virus is under control and that all necessary protective measures have been ensured, citizens’ worries proved to be justified. After weeks of steady numbers, the official statistics on COVID-19 infected patients were on the rise on Government’s official COVID-19 platform only days after the elections”, the authors emphasise.

Some measures were reintroduced, but the announcement of another curfew has caused the first mass unrest in Europe amidst COVID-19.

“Desperate, angry, and scared, thousands of citizens went out on the streets to protest the manner in which the Corona crisis was handled”, the report reads.

In North Macedonia, meanwhile, after the initial calming of the pandemic by mid-May in the country, the numbers of infected and deceased persons began to rise dramatically in June and July. Despite the rapid worsening of the epidemiological situation, the technical of Government of North Macedonia continued to liberalise the measures undertaken to combat the pandemic, with the parties reaching a compromise to hold the election originally scheduled for 12 April on 15 July.

Another country that is to hold an election this year, on 30 August, is Montenegro. Previously, it had seemed that the country had the coronavirus pandemic fully under control, which is why the National Coordination Body for Infectious Diseases (NKT), selected as the crisis management body, decided as early as 2 June, at the suggestion of the Public Health Institute, to declare an end to the coronavirus epidemic. Yet only a few weeks later, Montenegro finds itself again in the midst of a fight against the pandemic, the report reads.

In Albania, the sharp rise in the number of infections and fatalities in the period since the reopening of most business activities at the beginning of June has been used by opposition parties to criticise the government’s approach towards reopening.

“Despite the initial political convergence with the government measures, the opposition was quick to criticise the government on all fronts: the measures to stop the infection, the measures to support the economy and vulnerable groups and the measures taken before reopening. Overall, the pandemic did not contribute to reducing the existing political polarisation, although the ruling and opposition parties found common ground to agree on electoral reform on June 5”, the report reminds.

In Bosnia and Herzegovina, intensive parliamentary debates cannot compensate for the inherited weakness of the legislative government, the report finds.

The weakness of parliaments has been an issue throughout the region, but nowhere is the situation as worrying as in Serbia, where, due to the opposition’s boycott, the ruling Serbian Progressive Party won 188 out of 250 seats.

“The degradation in the performance of the Parliament as well as widespread distrust of citizens in their highest representative body have been flagged by the civil society watchdogs over the past years as one of key problems hampering the rule of law in Serbia. In this light, considerable doubts are rising regarding the ability of such Parliament to perform the oversight necessary to uphold a functioning checks and balances system”, the report concludes.

Results of the joint meeting of Albania – Kosovo governments