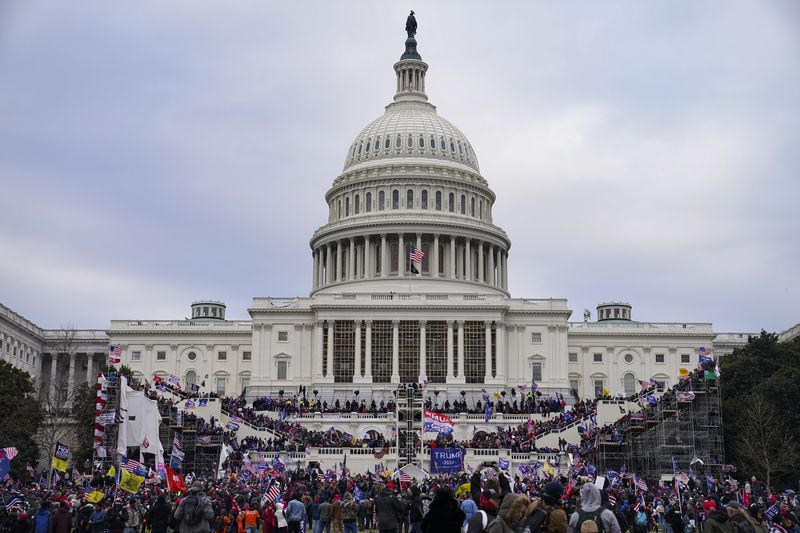 BELGRADE – America is on the brink of civil war, while the riots in Washington can be compared to protests in Serbia in 2000 and 2020 – that is how Serbian pro-government tabloids described the events in Washington on January 6, when supporters of outgoing US President Donald Trump entered the Congress building.

It is stated that “American democracy is falling apart at the seams and that the slaughterhouse in the Capitol was almost avoided”, as well as that “the United States has begun to disintegrate”.

The topic that was circulating in a large number of tabloids in those days was “the Balkanization of the United States of America”, with predictions that “the Republic of Texas, the Pacific Union, New England and the American Union will emerge”, which will be just some of the states that will emerge on the ground of present-day America. It was presented as a British prophecy for the United States, and “the Balkanization” as a new name for the American Disunited Nations, with a warning that war and bloodshed awaites them.

In numerous articles publised in Serbian tabloids it was discussed who was behind the “attack on the Capitol”. Several tabloids reported Trump’s statements in which he accused the Antifa movement of riots in Washington, but also the statements of other American officials that members of the MAGA movement, i.e. Trump’s supporters, were responsible for the demonstrations.

However, what remains unclear is how the tabloids presented the role of the FBI. From the fact that the FBI knew that riots were planned, that the FBI organized riots in Washington, to the fact that the FBI protects the American people from the next possible demonstrations on January 20, when the new President of the United States, Joe Biden, will be inaugurated.

“The FBI knew there would be chaos in Capitol Hill: Go there and be ready for war” and “Shocking information. FBI is behind the rigging of the elections in America and the storming of the Capitol” were just some of the headlines.

Also, dozens of articles announce “chaos across America”, “armed conflicts and insurgency” and “the biggest internal conflict since the Civil War” if Trump is replaced, which the FBI allegedly warns about.

In addition, there were sensationalist headlines that America was like a barrel of gunpowder before the inauguration of Biden, as well as that “America is shackled by fear” ​​before this event.

That Trump is alone against everyone and that his friends, family, political allies, but also companies have turned their backs on him, is one of the narratives that dominates in Serbian tabloids.

The distancing of coorporate America and the Republicans, but also the “hellish plan of the Democrats to put Trump in a madhouse” is the content of the articles that filled the tabloids after January 6.

In addition, it was written that the Republicans betrayed Trump, together with the Clintons, but also his daughter Ivanka Trump and that the “deep state” wants to erase Trump from history.

Also, headlines appeared in which Trump is called “American Šešelj”, referring to the president of Serbian Radical Party.

Who are the actors of the event?

Many of the articles concerned the actors of the events in Washington, in a tabloid manner, with headlines such as “Who is the woman who was killed in the protests in the United States?” and “Who is the ‘man with horns’ who broke into Congress last night? Now it has finally been revealed why he looks like that”.

After the identities of those killed during the protests were revealed, headlines such as: “This is the police officer killed in Washington: Death of the fifth victim of a demonstration in America shrouded in secrecy”, “This is a woman killed in the protests: Before the incident she sent a terrifying message via Twitter” and “She had no idea this was her last address: The last moments of the life of a woman who died in protests in the USA”.

The so-called “man with horns” also gained popularity in Serbian tabloids, therefore these media covered his problems in prison, his mother’s statements that “he is a patriot”, but also the fact that the animated series “The Simpsons” predicted riots in Congress and “a man with horns”.

Comparison with events in Serbia

“American double standards: Their police shot at protesters, while they criticize us for protests in which no one was killed” – reads one of the headlines criticizing the Serbian opposition and EU officials because they did not react the same to the recent situation in Washington and the protests in Serbia which happened in July 2020, with the explanation that “EU officials supported bringing down Vučić with saws, and now they are asking the police in America to react fiercely”. However, none of Serbian tabloids pointed out the reasons for the demonstrations, which were different in the two countries, nor did they report their explanations for such reactions by the opposition and the EU officials.

There was also an attack on N1 television, which has long been the target of pro-government tabloids, with allegations that the behavior of this television is shameful – “They ask Serbia to condemn the riots in the United States, but while Đilas (one of the opposition politicians in Serbia) was destroying Belgrade they had different demands”, reads one of the headlines. It is necessary to remind that N1 television was the only one to report from the first night of the protest in Belgrade, while no television with a national frequency did so.

In addition to the July protests, the tabloids compared the situation in America to the October 5 protests in Serbia, when the regime of Slobodan Milošević was overthrown, stating that “scenes from Washington remind of October 5”.

It was also stated that “the globalist elite is taking power in America”, as well as that “strong pressure on Serbs” will follow.

Zaev: Solution for name dispute by July, red lines only serve as obstacles

Vučić and Thaçi to discuss normalisation of relations in Brussels