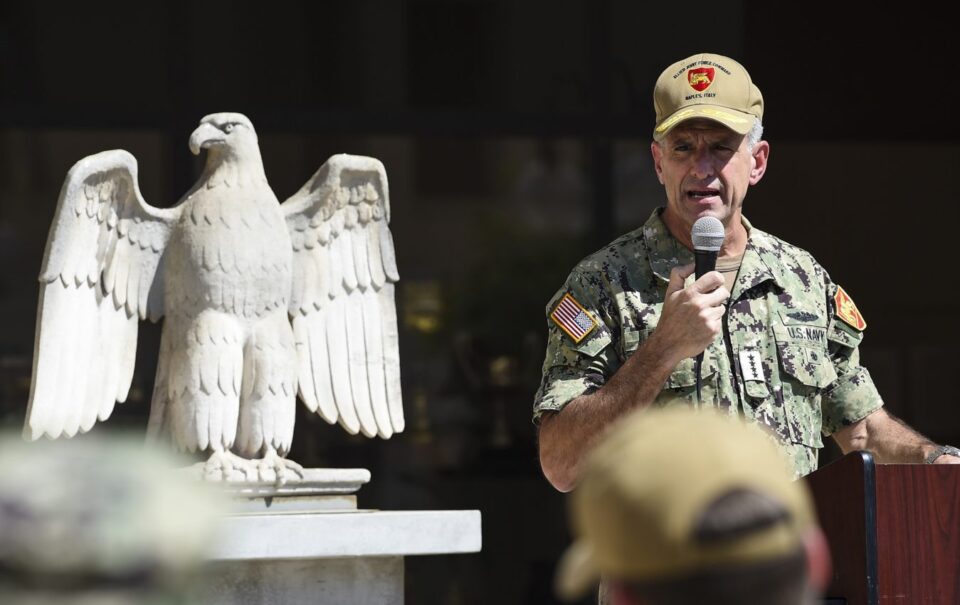 BELGRADE – The KFOR mission in Kosovo remains unchanged in accordance with the UN Resolution 1244, and the partnership between Serbia and NATO remains stable and reliable, says Admiral Robert Burke, Commander of Allied Joint Force Command Naples for CFSP.rs portal ahead his first visit to Belgrade, Sarajevo and KFOR.

He stressed that the partnership, stability and security of the Western Balkans are important for NATO, as well as for peace and stability in Europe. He adds that it is important to always look for ways to strengthen partnership and cooperation.

“Working together is something that improves us all, makes us better, stronger and more prepared to face the ever-changing and increasingly complex security challenges of today”,  says Admiral Burke.

Speaking about NATO’s policy in the region, Burke says it includes an open door policy and aims to strengthen stability and enhance cooperation.

“Our offices in Sarajevo, Belgrade and Skopje promote political dialogue and carry out practical cooperation on a wide range of areas. These include – amongst others – reform of national security forces, structures and institutions; training and capacity-building, with the aim to make the military forces of these countries more capable to operate alongside Allied forces (in NATO-led missions and exercises); safe disposal of obsolete weapons; crisis response to natural emergencies; and scientific cooperation”,  Burke points out.

Admiral Burke states that a stable Kosovo is of key importance for stability and security in the region which has been a priority of NATO for more than two decades.

“The UN mandate for our KFOR peacekeeping mission – which derives from the UN Security Council Resolution 1244 of 1999 – remains unchanged. We continue to support a safe and secure environment and freedom of movement for all communities in Kosovo, for the benefit of all people in Kosovo.”, says Burke and adds that NATO has no plans to change or reduce its mission in Kosovo.

Speaking about cooperation with Serbia, he says that KFOR has established direct communication channels with the Chief of the General Staff of the Serbian Army, General Milan Mojsilović.

“These have been really valuable and help ensure mutual understanding and deconfliction. Security is a cooperative, team effort, so we work closely with all security partners”, explains Burke.

In addition, Admiral Burke says that NATO and Serbia are close partners and work together to be more prepared for “civil emergencies, such as floods and forest fires.” NATO is training Serbian soldiers for international peacekeeping missions, and in 20 years it has invested 20 million euros in order for Serbia to destroy 230 tons of obsolete ammunition. In addition, Serbia and NATO have worked together to train Iraqi military doctors, providing support to the Iraqi Armed Forces, and they also have long-term scientific cooperation through NATO’s Science for Peace and Security program.

“The participation of Serbian officers in multinational peacekeeping missions is something I consider to be a joint success, as it is NATO’s capacity-building activities that helped enable Serbia to reach the required level of interoperability to successfully participate in peacekeeping missions worldwide. In fact, NATO personnel and mobile training teams from JFC Naples come here to Serbia to provide special training and capacity building activities.”, says Admiral Burke.

In the end, Admiral Burke says that Serbia is a neighbour, a reliable and respected partner that helps NATO promote peace and security in the region. This partnership is long, stable and continues to develop in a transparent, reliable and mutually beneficial way. He points out that NATO fully respects Serbia and the policy of military neutrality.