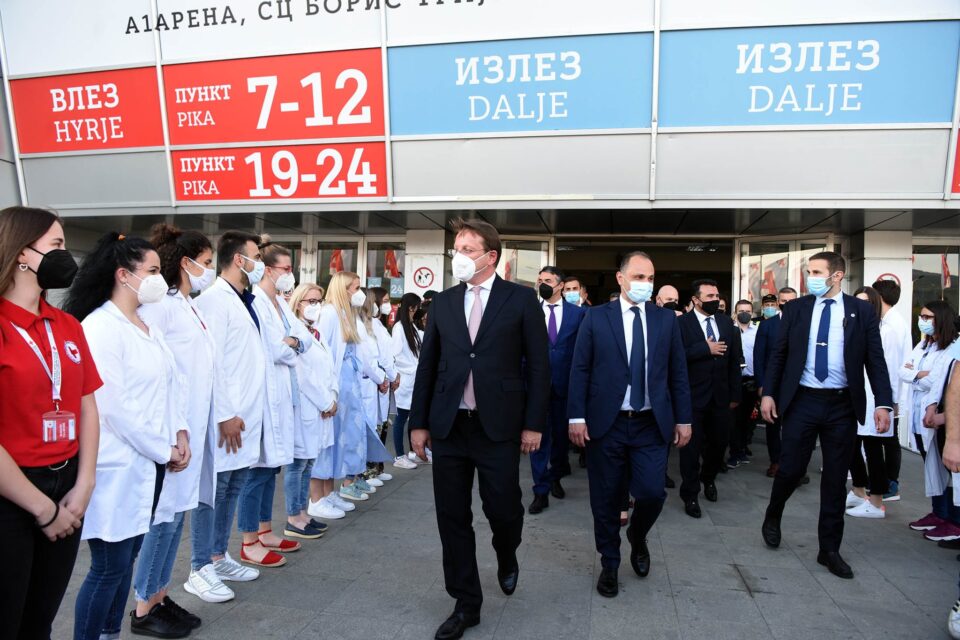 Varhelyi in his visit to Skopje on 4 May; Photo: Twitter / OliverVarhelyi

Commissioner for Neighbourhood and Enlargement Olivér Várhelyi visited all six Western Balkan countries this week as the first of the 651,000  BioNTech/Pfizer vaccines, shared and funded by the European Union, arrived at the region.

The vaccines are funded from the €70 million package adopted by the Commission in December 2020 to help cover the cost of vaccines, secured under the EU’s advance purchase agreements for the Western Balkan partners. Austria has facilitated the sharing of these EU-funded vaccines through legal arrangements with the producer and each Western Balkan partner. The overall distribution between countries is based on epidemiological needs.

Ambassadors of Austria were present at the meetings between the leaders of the WB countries and Várhelyi, who thanked Foreign Minister Alexander Schallenberg and also Chancellor Sebastian Kurz.

Schallenberg also arrived in Sarajevo at the same time as the Commissioner, stressing in his meeting with Foreign Minister of BiH Bisera Turković that the EU supported the country’s territorial integrity and that the stories of “non-papers” proposing the changes to the borders were negative.

In Montenegro, where the first 2,430 doses arrived on 4 May, Várhelyi also commented on the country’s recent request for assistance in repaying a loan from China.

“Of course, it is not up to us to consider the financial situation in the country. The government asked us for help and that is exactly what we are doing. But it is not up to us to pay loans instead of others. And I think that is not what the government is asking us to do, but rather to consider other financial modalities. I can’t tell you yet whether we can do it or not, we are considering it. We are considering different options and we are in communication with the Government”, Várhelyi said, Vijesti report.

Várhelyi started his visit in Serbia on Monday, where he thanked the country because it had not only been able to organise a very successful vaccination campaign but had also been delivering almost 100.000 doses of vaccines to the region.

During his meeting with the PM of North Macedonia Zoran Zaev in Skopje, the Commissioner also spoke of efforts to get an agreement in the Council of the EU to officially start accession talks with the country as soon as possible, he tweeted.

On the other hand, during his visit to Albania on Wednesday,  Várhelyi stated that the country had met all EU conditions and is ready to start accession talks, but North Macedonia still needs to get Bulgaria’s approval. Albania is thus ready to sit in the first intergovernmental conference with the EU, according to the European Commission.

Várhelyi concluded his trip to the region in Kosovo, where 4,680 doses of vaccines arrived yesterday.