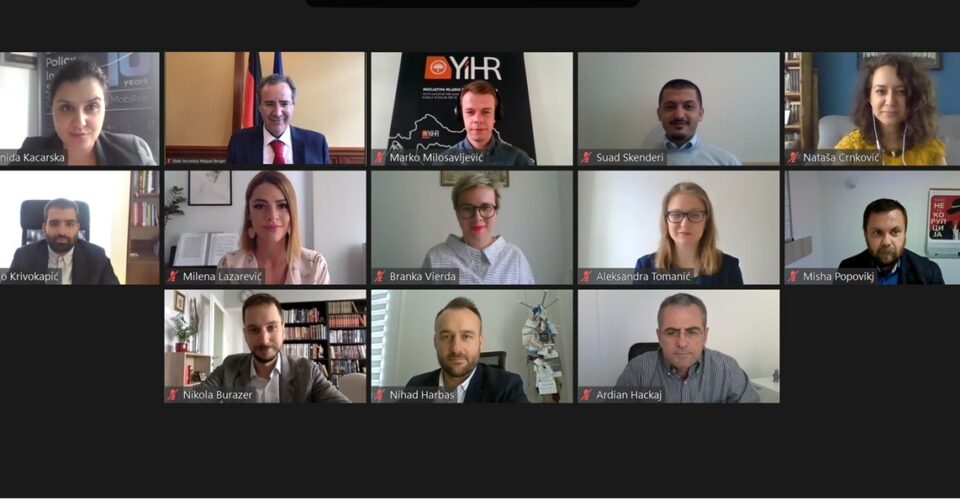 BERLIN – Civil Society & Think Tank Forum of the 2021 Berlin Process wrapped up today with a discussion on policy recommendations drafted by the civil society organisations and think tanks who participated in the two-day event.

State Secretary at the German Foreign Office Miguel Berger, representing this year’s organizer of the Summit, stated that the Civil Society Forum was much more than a side event – it was a key pillar of the Berlin Process, conclusions of which will be discussed by the representatives of the governments during the Summit.

Facilitators of the working groups for democracy, media freedom, and the future of Europe then proceeded to present their conclusions.

Milena Lazarević from the European Policy Centre in Belgrade said that the EU should avoid glorification of national elites when it is not warranted.

“Bilateral issues blocking the enlargement should be reframed as the issues of the EU policy”, said Lazarević, adding that the EU should offer phased membership rather than enforcing it.

Programme Director of the Center for Contemporary Politics Nikola Burazer stressed that transparency of ownership and financing, the role of the state, and the lack of respect to legal provisions were the most important issues for the functioning of the media in the Western Balkans.

“EU should be more vocal about media freedom in the WB, it should design new instruments to monitor media freedom, such as senior expert groups and special reports on media”, he said.

We would like to thank all of our more than 200 participants of the #CSFBerlin Forum 1 for your contributions, questions & ideas! Stay tuned for the summary of results & their discussion at #CSFBerlin Forum 2 on July 5! #WesternBalkans pic.twitter.com/jBGj7NUArv

The next group of CSOs, represented by Marko Milosavljević of the Youth Initiative for Human Rights from Serbia and his counterpart Branka Vierda from Croatia, tackled the issues of transitional justice, also highlighting, among other things, the importance of media freedom and EU conditionality.

According to them, the CSOs should work hard to develop new approaches in order to contribute to sustainable peace in the region. One way to achieve this is multidisciplinary cooperation between different types of NGOs strong cooperation between NGOs should be also extended with academic institutions.

Three working groups tackled the issues of the environment, with Executive Director of the European Fund for the Balkans Aleksandra Tomanić stressing the seriousness of air pollution in the region.

“We are facing tremendous air pollution. The knowledge outside institutions is being framed as an attack on the government. EU needs to include WB in all its future climate activities, the region really needs Union’s help”, she said, adding that awareness-raising should be one of the priorities in the future.

Read also our interview with the organisers of the Forum: [EWB Interview] Esch, Brey: EU will continue to support the Berlin Process, momentum is in the hands of the region

When it came to the issue of the energy transition, Nihad Harbas from the Regional Center for Sustainable Energy Transition that civil society needed to point out non-transparent work and corruption in the energy sector, while the compliance with EU laws in this area must be a basic condition for donor support.

In the area of infrastructure, the region faces state capture, the ineptitude of public administration and the increased presence of third actors, said Ardian Hackaj from the Cooperation and Development Institute of Albania.

He proposed that the governments should have obligatory consultations with CSOs on infrastructure laws and that integrity compliance should be a conditionality for EU infrastructure support.

Digitalisation was also one of the topics discussed, with Danilo Krivokapić from the SHARE foundation emphasizing that the governments must build the legal framework in line with EU standards, and be guided with respect of principles in the area of data protection when working on digitalization. The CSOs, on the other hand, need to raise internal capacities in order to understand and deal with the issues of digitalization and to improve regional cooperation in this area.

The second part of the Civil Society & Think Tank Forum will be taking place on 5 July, coinciding with the leader’s Summit, Aspen Institute announced.