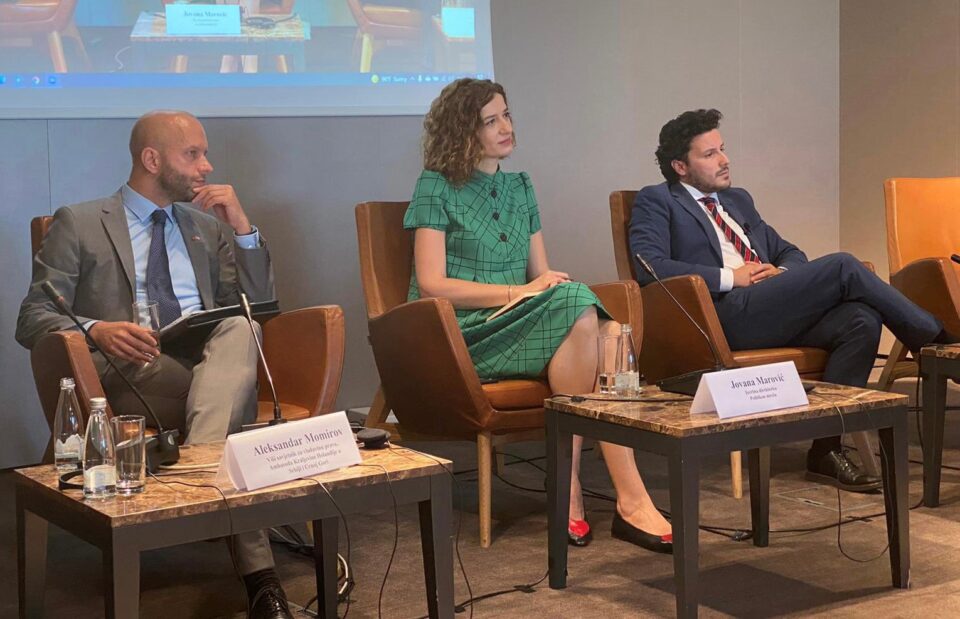 PODGORICA – More clear, credible, and concrete actions by EU in the Western Balkan, as well as including this region in the mechanisms that already exist for the EU member states, will provide an actual improvement on their path to the EU, concluded the final conference organised within the project “Strengthening the Rule of Law in the Western Balkans: Old Tools for New Rules”.

Jovana Marović, Executive Director at Politikon Network, presented the goal of the project, which is being implemented together with the Belgrade-based Centre for Contemporary Politics, with the support of the Embassy of the Kingdom of Norway in Serbia and Montenegro.

“The idea of the project was to see the possibilities of some instruments and mechanisms that have been tested by the European Commission and European Union in some countries of the Western Balkans, as well as to see if those instruments could be implemented in other countries of the region”, she pointed out and added that those mechanisms were the vetting process, Priebe report, the rule of law council and Non-papers.

Aleksandar Momirov, Senior Policy Advisor on the Rule of Law at the Embassy of the Kingdom of the Netherlands in Serbia and Montenegro, emphasized support for the project, given the importance of the rule of law for the Netherlands.

“The rule of law is the cornerstone of Dutch policy in the Western Balkans, but also within the EU. Strengthening the rule of law within the EU, as well as in the candidate countries during their accession process, are inseparable processes. It is in our direct interest for the rule of law to be strengthened at the beginning so that it can resist attacks later” he said, adding that because of the additional focus on the rule of law in the new methodology, the Netherlands welcomes its application in WB countries.

However, as he explained, there is no clear prescription for the realization of the rule of law, so discussions on this topic, as provided within this project, are more than welcome.

Dritan Abazović, Deputy Prime Minister of Montenegro, explained that, when it comes to the rule of law, the situation in Montenegro is complex and very much different in relation to other European countries and that therefore the application of certain instruments is difficult.

“We want solutions, the new government wants that. However, that is not easy in the political situation such as the one that exists in Montenegro, but that should not demotivate us”, he said.

In accordance with that, the Government of Montenegro, as he states, decided to achieve certain results, and determined the rule of law as a priority.

“The new Government has set the rule of law as a priority above all other priorities. The activities that are being undertaken are primarily aimed at fulfilling this criterion and achieving visible results “, he explained.

He adds that the rule of law is necessary for the state to be able to make progress in any field, especially in the field of European integration.

“Strong institutions mean a strong state, and a strong state means sustainability and progress for all citizens. Without that we are pushing the state into instability and uncertainty and the loss of the leading role in the process of European integration,” he stated.

Zoran Nechev, Senior Researcher at the Institute for Democracy “Societas Civilis” and Member of the Balkans in Europe Policy Advisory Group (BiEPAG), pointed out that the poor results implemented by Serbia and Montenegro influenced the EU’s new approach to the entire region.

“The French started talking about the New Methodology after the visit of President Macron to Serbia. In that moment it was cleat that this process is not working. So, the new methodology is a result of the poor results in the overall accession process of Serbia and Montenegro”, said he, adding that the problem is now to adjust the new framework to the different positions of Serbia and Montenegro on one side which are already negotiating and North Macedonia and Albania, which have not started yet.

He explained that new mechanisms by EU in the WB countries are not necessary and that this region should be included in those mechanisms that already exist for Member States.

“The best way is not to compare WB countries between them. Instead of that, they should be compared with the Member States and then everybody will see how successful they are. For that to be done, they must be included in the instruments used for member states”, Nechev concluded.

Boris Marić, Executive Director at the Center for Civil Liberties (CEGAS), commented on recent events and the repeated refusal of the EU to start accession negotiations with Albania and North Macedonia.

In his opinion, the red light is not a good message for the entire region. A large part of the responsibility for future progress, however, still lies with the candidate countries.

Nikola Burazer, Program Director of the Centre for Contemporary Politics (CSP), talked about the stagnation of Serbia in the negotiation process with Serbia.

According to him, although formally the stagnation has been present since December 2019, when Serbia opened the last chapter in the negotiations with the EU, the whole process slowdown after the big rush in 2016.

“During that year, a new Government was elected to complete the reform process, but no major progress has been made since then. Serbia opened fewer and fewer chapters, until 2020, when it did not open any”, he explained.

According to him, the stagnation continues, considering that Serbia was not given the opportunity to open a new cluster again. The reasons are repeated by the EU members – the problem is the rule of law, the state of democracy, the work of parliament.

He adds that the European Union has the instruments, such as the Priebe report, to correct this situation and ensure reforms in Serbia. Still, it doesn’t.