The publishing of the Albania 2021 EC Report last week was almost a non-event with vague media coverage and a public discourse concerned more with Albania’s “conquest” of Earth’s orbit next year than the 135 page document prepared in Brussels.

Last year many Albanians looked forward to the report and the Council’s position about opening accession negotiations. The thrill was gone this year and PM Rama did not hide his indifference at the press conference with EU Ambassador Luigi Soreca. Indeed, Rama had already prepared the public for this non-news. Even the EU ambassador’s discrete “apologizing” for the failure to start negotiations and his call for EU to do so without delay is nothing new. Although Soreca eloquently pointed out the recommendations of the report and underlined few worrying findings, PM Rama was not disturbed. In fact, Rama calmly dismissed some findings such as the concerns over media freedom. He even brought clarity on issues which the EC report and the ambassador did not dare to articulate in full, such as the “patronage database” by clearly claiming the Socialist Party’s (SP) authorship of the system exposed few months ago.

These may be small, but in fact are very indicative details showing how unimportant the EC annual reports have become not only for local politicians, but also for the ordinary Albanian. This is very unusual particularly for Albania, a country which citizens trust EU and other internationals institutions much more than they do their own according to IDM’s annual Trust in Governance reports. While most Albanians still support EU membership, they are witnessing an enlargement process that is not transformative or strategic for the EU and is not considered a priority by member states. As EC reports become more unattractive for Albanians and EU keeps maneuvering to prioritize stability, it’s only a matter of time until Albanians’ support will fall below 50%. PM Rama and his counterparts in Serbia and N. Macedonia seem prepared and even actively working for such a scenario by offering up empty dreams of a single market ruled by Balkan, rather than EU standards.

According to the EC report 2021, Albania performed slightly better than it did a year ago (2020) – two chapters rated Albania (30 and 31) with a “good level of preparedness” and another fifteen with “moderately prepared” status. In 2020 Albania was assessed to have a good level of preparedness only for chapter 31 while being moderately prepared in sixteen chapters. However, the 2021 report cited “no / limited progress” more frequently  than it did in 2020.

Despite the challenges posed by the post-earthquake reconstruction and COVID19 situation, the  EC praised Albania’s achievements in relation to the economic criteria (e.g. competitiveness, public procurement, statistics etc.), green agenda and connectivity. The return of opposition in the institutional life after two year boycott is observed as an opportunity for political dialogue and cooperation for reforms. In February 2019 the opposition parties resigned from parliament and in June they boycotted local elections,enabling the ruling SP full control over national governance processes and over all local government units. The biggest loser of this immature, catastrophic move was of course Albanian democracy which deteriorated severely over the following two years, as catalogued in the Freedom House’s Nations in Transit reports for Albania (2020-2021).

A mixed picture can be observed vis-à-vis the political criteria in EC report 2021. The document identifies key developments under Cluster 1 “Fundamentals of the accession process”. EC praises progress on justice reform, the fight against organized crime, anticorruption, etc.. It also underlines serious concerns over freedom of expression, media, and calls for more concerted actions on a few other challenges such as political party financing, prosecuting high level corruption, civil society and so on.

Yet several questionable conclusions are made in the report such as the praise for the high level of transparency by the High Justice Council – HJC at a time when this body refused to publish minutes of some meetings requested by BIRN Albania while other monitoring reports have called for more transparency. Other questionable or contradictory conclusions are drawn in the report – for example, after claiming that justice reform reduced political interference in the judiciary, EC tries to justify the lack of a track record for high level corruption by describing it as an “objective that requires political will and further structured and consistent actions”. It remains unclear why institutions which are allegedly independent from politics and free from political interference, would need political will or support to actually do their job – fight high level corruption.

Through a diplomatic language that excessively tries to not  hurt the feelings of politicians, especially those in power, the report in general truthfully detects challenges and areas needing further efforts. For some events though, EC doesn’t seem willing to push for more meaningful actions. One such case is the investigation into the leaking of sensitive personal data, including political preferences and other personal information of over 900,000 voters in Tirana during the April general election campaign. The leaked database contains also the names of 9,000 SP ‘patrons’, many of whom are public sector employees, police officers and even army personnel. While media and civil society in Albania, as well as prominent international organizations such as Transparency International have called for immediate investigation by the Special Prosecution SPAK, the EC report seems satisfied with the ex-officio administrative inquiry by the Information and Data Protection Commissioner who issued recommendations to authorities.

Despite the deficiencies, the Commission’s report rightfully urges EU member states to open accession negotiations as Albania has met the conditions set by them.

On the other hand, considering the fact that accession process has become anything but merit-based or predictable, Albanians rightfully ignore the publishing of the report as a non-event. Who would blame Albanians for their indifference this year?

The Chinese ‘silk road’ in the void between EU strategy, CEE interests and the citizens

[EWB Interview] Abazović: The change of government in Montenegro is an example for the entire region, the government is committed to EU membership 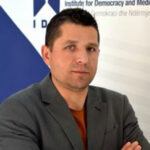