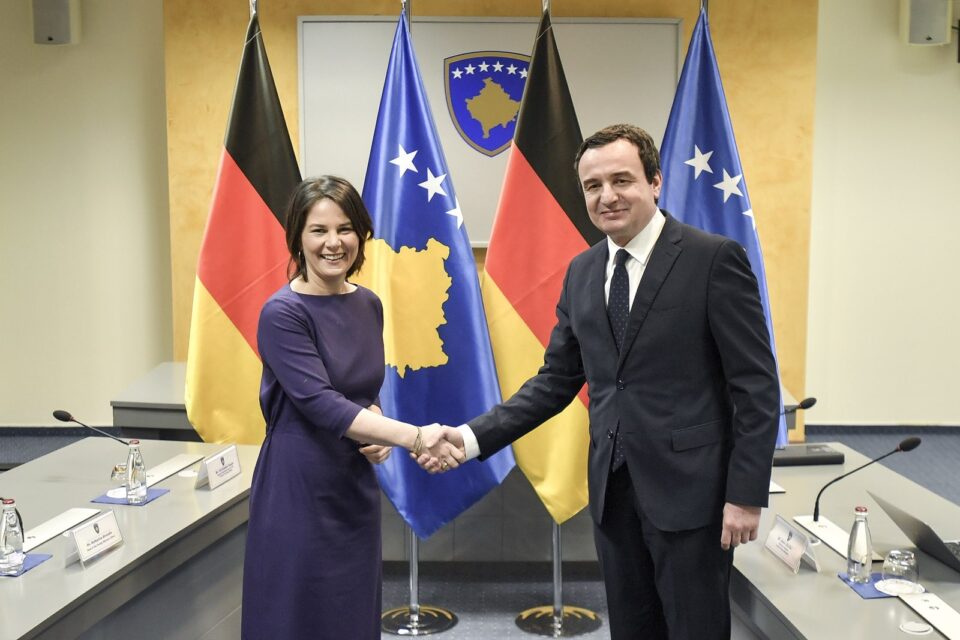 PRISTINA – Foreign Minister of Germany Annalena Baerbock arrived to Kosovo on Thursday as a part of her visit to the region. Baerbock and Prime Minister Albin Kurti discussed, among other, visa liberalisation and Kosovo’s EU integration process.

At a joint press conference, Kurti and Baerbock confirmed that they discussed “reforms” being implemented by Kosovo in the field of the rule of law and fight against corruption, for which Kosovo has the full support of Germany.

Germany is currently the largest donor in Kosovo, and the new German government even wants to expand the contributions, Baerbock said, adding that she would open a wind farm, financed by her country, tomorrow, as the largest single investment in Kosovo, KoSSev reported.

Baerbock also confirmed that Kosovo has “done its part” when it comes to visa liberalization and that it is now up to the EU to do its part.

However, there is no “fast road” to Europe: “The EU is a project of peace and, above all, it is a community of values, for the good of the people. That means it applies to all people. A country that wants to belong to the EU must meet not only economic criteria, but also issues of democracy, rule of law, respect for international law, these are the fundamental criteria… There are no fast tracks or fast mechanisms here,” Baerbock said

Baerbock also stressed that it was important for Kosovo and Serbia to sit at the negotiation table and discuss normalisation of relations. German Foreign Minister stated that before Kosovo’s membership into the EU, the country must get the candidate status, and even before that is the Dialogue with Serbia. She said that Germany supports the EU and its Special Representative for Dialogue, Miroslav Lajčák , in facilitating these talks, Gazeta Express reports.

Kosovo Prime Minister Kurti thanked Baerbock for Germany’s continuous support throughout the years and for its principled approach towards the Western Balkan region. He said that Kosovo’s diaspora in Germany serves as a bridge between our people and our economies, bringing the investments that strengthen our relations.

“Kosovo is a reliable partner and proud friend of Germany,” he said.

In addition, to Kurti, German FM Baerbock, who is accompanied by German envoy for the Western Balkans, Manuel Sarrazin, was hosted by Kosovo President Vjosa Osmani and Foreign Minister Donika Gervalla. Previously, she visited Bosnia and Herzegovina, and she is also scheduled to visit Serbia and Moldova.

Christopher Hill confirmed as the new US Ambassador to Serbia

[BSF] Vučić: Serbia will do everything to maintain regional peace