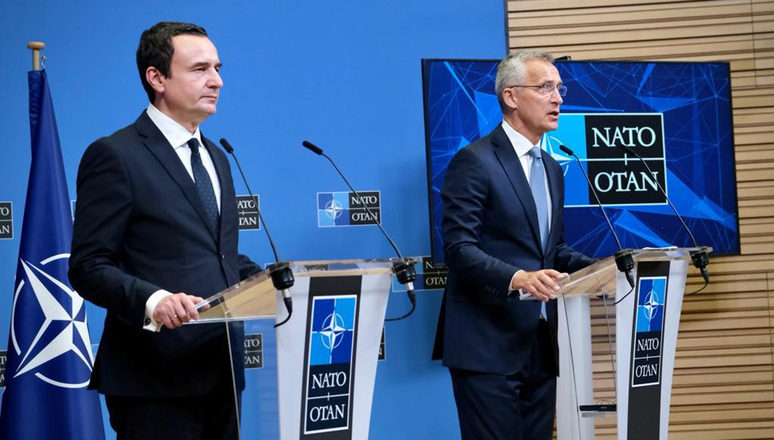 According to Stoltenberg, KFOR is ready to intervene if stability is jeopardized.

“NATO continues to monitor the situation on the ground closely. Our KFOR peacekeeping mission remains focused on its UN mandate: Should stability be jeopardized, KFOR stands ready to intervene,” Stoltenberg told a joint press conference following his meeting with Vučić.

He assessed that constructive dialogue is the only way to solve differences in the region, and the EU – facilitated Kosovo-Serbia dialogue is the platform to find a solution that respects the rights of all communities.

Serbian President Aleksandar Vučić said he discussed with Stoltenberg the recent events in Kosovo and added that Serbia sees KFOR’s role as very important. He thanked Stoltenberg for wanting to hear Serbia’s position.

“We will continue to respect the KFOR mandate in line with international norms, and I believe that both Stoltenberg and the whole of NATO will show understanding. For Serbia, peace and stability are of vital importance,” Vučić told the press conference. He added that Thursday’s talks with Kosovo Prime Minister Albin Kurti will be difficult.

“We practically agree on nothing, but we will stick to international law, to the Brussels Agreement, as for our bilateral relations, I told Stoltenberg that Serbia is a militarily neutral country and that it will not take sides in the sense of blocs,” Serbian President said.

He added that Serbia wants to avoid “every possibility of escalation or conflicts”. “We acted responsibly, we did not cause provocations or incidents,” Vučić underlined, N1 reported.

He added that Serbia wants to avoid “every possibility of escalation or conflicts”. “We acted responsibly, we did not cause provocations or incidents,” Aleksandar Vučić said.

“We explained our position, I presented a list of Pristina’s special units’ raids in the north which needed permission for that, a list of all incidents and attacks on the Serb population. It is our duty to talk about our position and to do everything in order to preserve peace and stability,” Vucic reiterated.

Prime Minister of Kosovo Albin Kurti told at the press conference that Pristina is seeking membership in NATO and added that the government and citizens of Kosovo welcome NATO’s commitment to peace and security in Kosovo.

Asked if there is a possibility that Pristina will abandon the latest decisions on licence plates and Serbian documents, Kurti explained that Pristina fulfils its legal obligations. When asked if he agrees with the view that both sides are responsible for possible escalation, Kurti said that “there are two sides.”

“One is a democratic Kosovo, and the other is the illegal structures of Serbia in the north “, Kurti concluded.

Low expectations from the Vučić-Kurti meeting in Brussels

Borrell: There is no agreement today, we will continue talks with Belgrade and Pristina

Hoti on the EC report: Progress has been made despite difficulties