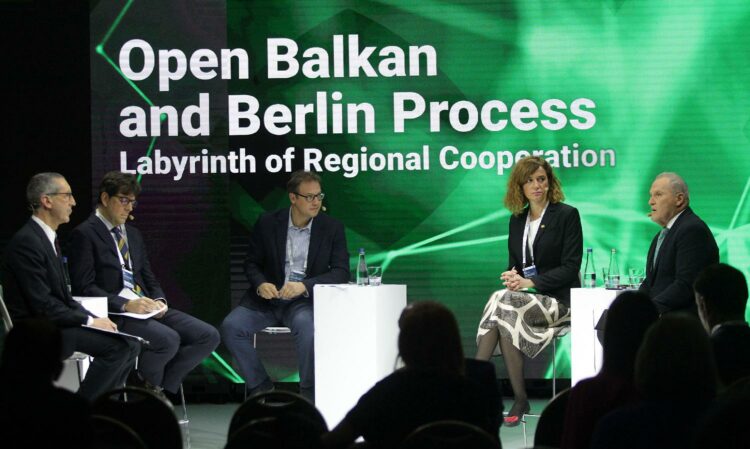 BELGRADE – For successful regional cooperation, it is necessary to include all the countries of the Western Balkans and to use all good practices from existing initiatives, the Berlin Process, and Open Balkan, it was concluded during the panel “Open Balkan and Berlin Process – Labyrinth of Regional Cooperation”, at Belgrade Security Conference.

The Minister of European Affairs of Montenegro, Jovana Marović, stated that the countries of the Western Balkans should focus on the Berlin process and within it use the good practices of the Open Balkan initiative.

“If we are already in the Berlin process, all six countries of the Western Balkans, if we are moving forward with the Common Regional Market and if the Open Balkan somehow overlaps with that, then the goal is to combine the two initiatives, take the best practices from both and have one common in which all the countries of the region will participate”, Marović said.

She explained that there is no official position of the Government of Montenegro on the Open Balkans and that political elites are politicizing the issue. One bloc, she added, advocates Montenegro joining that initiative, pointing to the economic benefits, while the other is against it, explaining that it is “part of Serbian hegemony” and that it is a political, not an economic issue.

According to the Montenegrin minister, there is a majority of parties in the government that is currently in favor of the Open Balkans, but the analysis of the ministry headed by it shows that “there is no rush” for Montenegro to join.

That analysis shows the Open Balkans initiative does not yet have great results, there is no mechanism for resolving disputes and there is no framework agreement that would guarantee equal status for all participants.

“The Western Balkans should focus on the Berlin process and integrate good practices from the Open Balkans into it, such as the agreement on food safety,” Marović said.

Advisor to the Prime Minister of Albania, Odeta Barbullushi, pointed out that thanks to the Open Balkans initiative, the trade exchange of the countries that are part of that initiative has increased, that there are more tourists from Serbia in Albania, that access to the labor market and obtaining work and residence permits has been facilitated.

Barbullushi said that the question is how to make the two initiatives complementary in order to benefit citizens more and serve as a “springboard” for the process of European integration, especially integration into the EU single market.

According to her, the Open Balkans initiative is a response to the needs of citizens and businesses and an instrument for improving regional cooperation, which is necessary for building trust.

Kosovo journalist Veton Suroi stated that the most important goal of regional initiatives is the capacity of countries to cooperate institutionally on the establishment of lasting peace.

He added that the process of regional integration should be measurable and that with faster integration, the region will have greater support from the EU, including financial support.

“The challenge is not the Berlin process or the Open Balkans, but how to coordinate them, how to use the energy invested in both processes and combine them,” Suroi said.

He underlined that the countries of the Western Balkans should be included in the process of European integration, among other things, due to the fact that some live in areas where the conflict has not ended.

[BSC] Illiberal regimes in the EU threaten its values and credibility