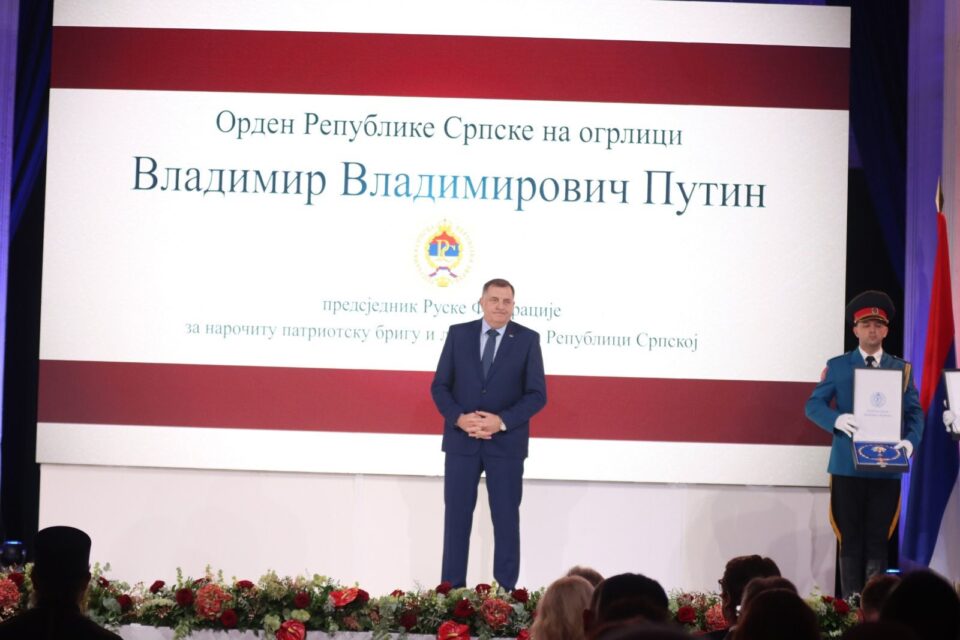 BRUSSELS – EU Spokesperson Peter Stano condemned the commemoration of 9 January and the awarding of Vladimir Putin. He recalled that the decision of the Constitutional Court of BiH must be respected and that the awarding of decorations to Putin was deplorable and misguided.

“The European Union condemns the decision of the RS authorities to award the award to Putin because he is directly responsible for the illegal aggression against Ukraine, the suffering of Ukrainian citizens, and the destruction of infrastructure,” Stano told.

He added that “aligning with Putin in those circumstances means the international isolation of Republika Srpska and its leadership”, stressing that awarding Putin “is regrettable and wrong”.

The spokesperson stated that “Dodik knows very well what the EU and its members expect and what he, his authorities, and BiH as a whole need to do in order to progress on the European path.”

As a part of the celebration of the “Day of Republica Srpska” the President of the RS entity Milorad Dodik honored the Russian President with the Order of Republica Srpska. Dodik said that Putin has shown “particularly patriotic care and love for the Republica Srpska and for developing and strengthening cooperation and economic and political relations between RS and Russia”.

According to N1 BiH, the Embassy of the United States in Sarajevo condemned the commemoration of 9 January which the Constitutional court declared illegal and Sunday’s award of Vladimir Putin on this occasion. US Embassy to BiH warned that undermining the state of BiH and claims for RS independence will only result in the entity’s destruction.

“RS President Milorad Dodik’s decision to bestow an award on Vladimir Putin, the man who launched an unprovoked invasion of Ukraine that has resulted in the death of thousands of civilians and the massive destruction of infrastructure, was reprehensible. It was a repudiation of the values of the Euro-Atlantic community and rules-based international orders”, the statement said.

North Macedonia’s OSCE Chairmanship to focus on the people