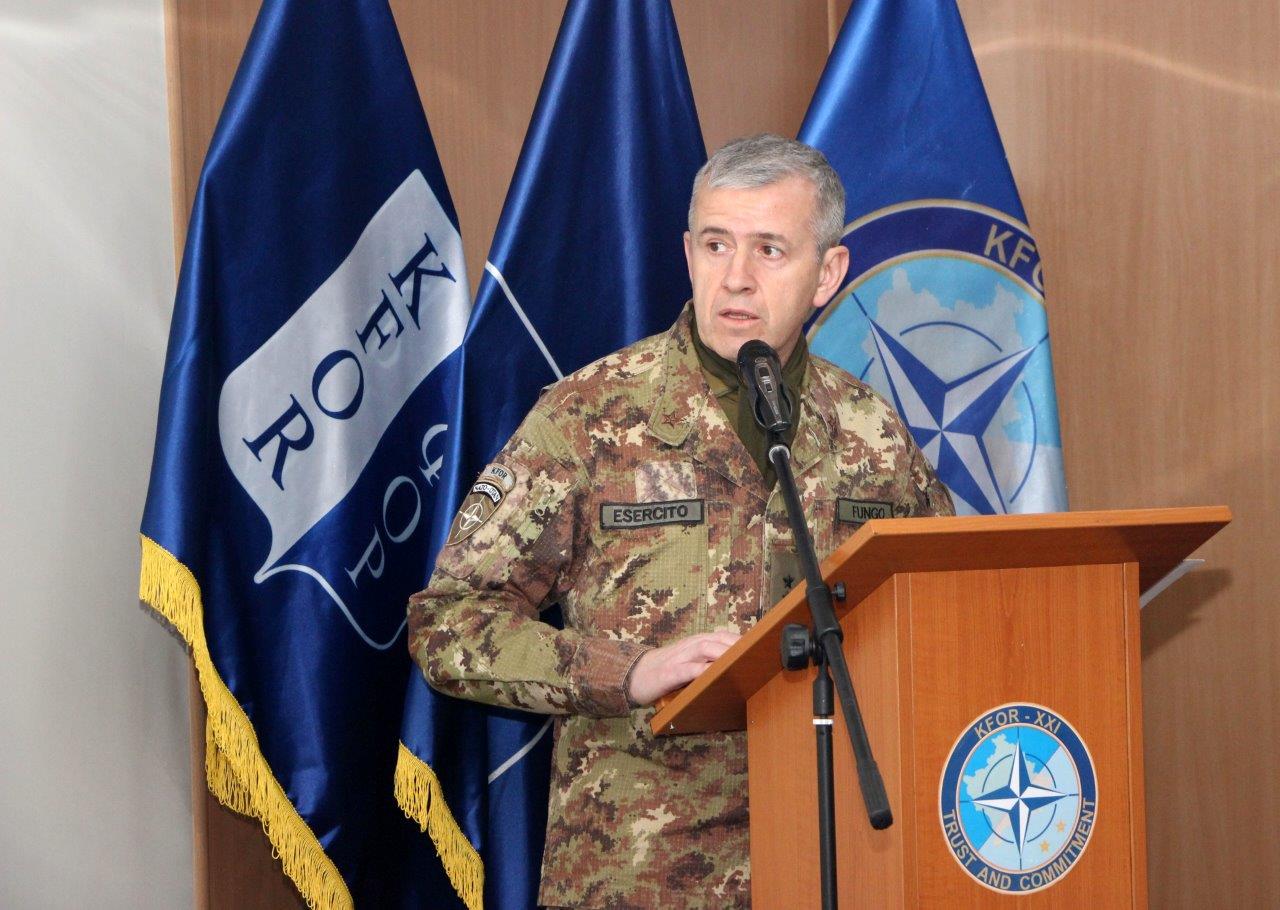 European Western Balkans: KFOR’s aims to contribute to a safe and secure environment. How would you asses current security situation in Kosovo?

Giovanni Fungo: Since 1999, KFOR has operated for the security of all people in Kosovo. In accordance with the United Nations Security Council Resolution 1244, we have ensured freedom of movement and a safe and secure environment. Inter-ethnic incidents have decreased significantly and the security situation in Kosovo has greatly improved, including in the areas populated by Serb majorities. Kosovo Serbs and other minorities have been integrated in local security institutions. Nowadays, except the Orthodox Monastery of Decani, monitored by KFOR soldiers, the other religious sites of the Serbian Orthodox Church, which were considered at risk, are under the protection of the Kosovo police. KFOR remains vigilant and within its means and capabilities it continues to collaborate with the security institutions in Kosovo and the international Community to ensure that Kosovo has the proper means to deal with any security challenge.

Overall, the role of KFOR has been and remains essential to help making Kosovo stable, democratic, multi-ethnic and peaceful.

EWB: Mr. Secretary General Jens Stoltenberg said that NATO supports the transformation of the Kosovo Security Force into Kosovo Armed Forces, but only within the existing mandate. What does that mean? Is it possible to expect full-fledged transformation while NATO is present in Kosovo?

GF: NATO supports the ongoing dialogue between Pristina and Belgrade facilitated by the European Union. KFOR contributes by implementing its UN-driven mandate to maintain a safe and secure environment and freedom of movement for all people in Kosovo. KFOR carries out its activities in close cooperation and coordination with the United Nations (UN), the European Union (EU) and other international actors to support the development of a stable, democratic, multi-ethnic and peaceful Kosovo.

EWB: How would you asses the cooperation between KFOR and Ministry of Defence of the Republic of Serbia?

KFOR, has a long-lasting relationship with the Serbian Armed Forces (SAF). This relationship was developed over the past seventeen years and can be assessed as highly professional and constructive for both sides.

In 1999 the Military Technical Agreement was signed between the International Security Force (“KFOR”) and at that time the Governments of the Federal Republic of Yugoslavia and the Republic of Serbia. Following the signature of this agreement, several subordinate documents were signed in order to establish agreed temporary operating procedures for cooperation, coordination and de-confliction between the Parties along the Kosovo Administrative Boundary Line (ABL). Nowadays cooperation between KFOR and the Serbian Armed Forces consists of a wide range of activities such as meetings, synchronized activities on the ABL including patrols, medical evacuation exercises and other events that support better understanding, effective communication and operational effectiveness of military operations. In this framework, I have regular meetings and fruitful exchanges of views with the Serbian Chief of Defence.

The KFOR XXI motto states “Trust and Commitment”: in this respect, I can say that both KFOR and the Serbian Armed Forces have developed mutual trust over time and they are always committed to ensure a safe and secure environment along the ABL.

EWB: Albania and Croatia have sent a letter to Mr. Secretary General in which they expressed concerns on Kosovo’s security. Are those concerns justified? What are your thoughts on this issue?

The situation in Kosovo is stable, despite some of the tensions that we have seen lately. Our KFOR mission remains fully committed to support a peaceful, stable, and multi-ethnic Kosovo, as mandated by the UN Security Council Resolution 1244. Together with EULEX and the Kosovo Police, we continue assisting the implementation of the agreements between Belgrade and Pristina and the Decani Monastery remains under direct KFOR protection. We stand ready to respond to any threat that could be posed to the preservation of a  safe and secure environment.

Van den Dool: I believe Chapters 23, 24 can be opened in June

Zaev: I wish if date is set in 2018 for start of association negotiations