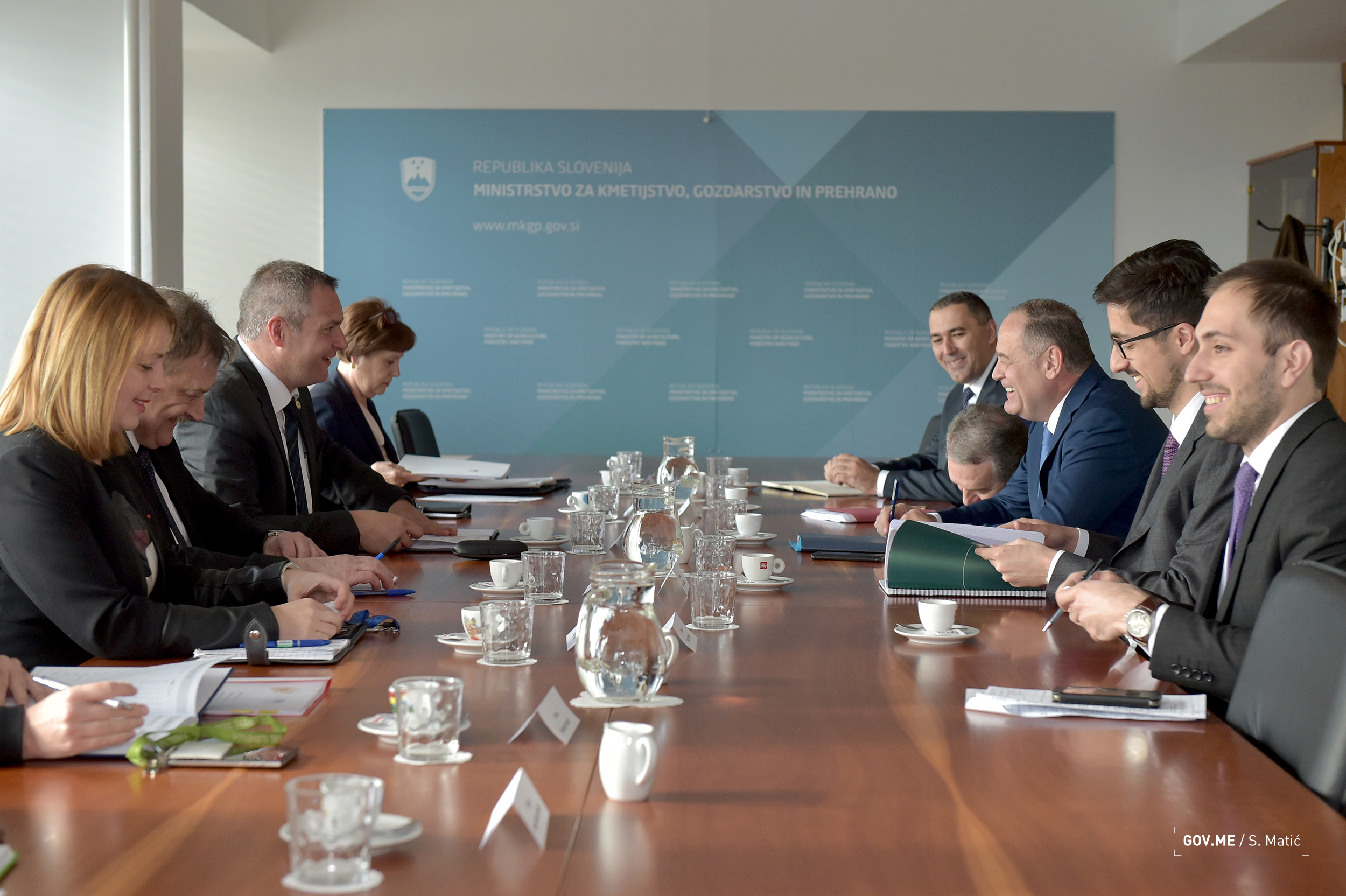 Delegation of Montenegro and Slovenia in Ljubljana; Photo: Government of Montenegro
LJUBLJANA – During the first day of the Joint Commission for the implementation of the Agreement on Economic Cooperation between Montenegro and Slovenia, Montenegrin delegation headed by Deputy Prime Minister and Minister of Agriculture and Rural Development of Montenegro Milutin Simović met Monday with various Slovenian officials for talks on boosting economic ties between the two countries, Government of Montenegro stated.
DPM Simović met with Slovenian Minister of Infrastructure Peter Gašperšič with whom he discussed bilateral relations between the two states. The officials agreed that Montenegro and Slovenia cherish friendly relations which can be additionally strengthened in various fields of mutual interest, namely energy and infrastructure. In that regard, DPM Simović took the opportunity to present on-going projects in Montenegro which could be of interest to the Slovenian economy, referring particularly to the submarine power cable and hydro potentials of the rivers Morača and Komarnica.
Slovenian Minister Gašperšič said that Slovenia is currently working on the implementation of the second railway track Divača-Koper which is strategically important not only for the country, but for the entire region as well. He also said that the Western Balkan countries should join their forces in order to achieve the joint approach when it comes to development and preparation of the infrastructure projects, adding that the forthcoming Western Balkans Summit will be a great opportunity for achieving that common goal.
The meeting between DPM Simović and Slovenian Minister of Finance Mateja Vraničar Erman stressed that direct channel of communication between the two finance ministries should be established in the coming period in order to implement the concrete projects aimed at strengthening Montenegro’s capacities for using the EU pre-accession funds and improving the overall business environment.
Within the framework of the Joint Commission, Minister of Economy Dragica Seklulić met with Slovenian Minister of Economic Development and Technology Zdravko Počivalšek for talks on economic cooperation between the two countries. The two officials emphasised that Montenegro and Slovenia cherish good cooperation in this area, adding that the trade exchange should be more balanced in the future. They also agreed to hold a joint Economic and Investment forum which will take place in Montenegro, as a platform where both countries’ entrepreneurs and investors can exchange experience, present investment potentials and identify areas of mutual interest aimed at launching the joint projects.
previous post

Lunacek: Remaining benchmarks on the way to visa liberalisation can and must be fulfilled