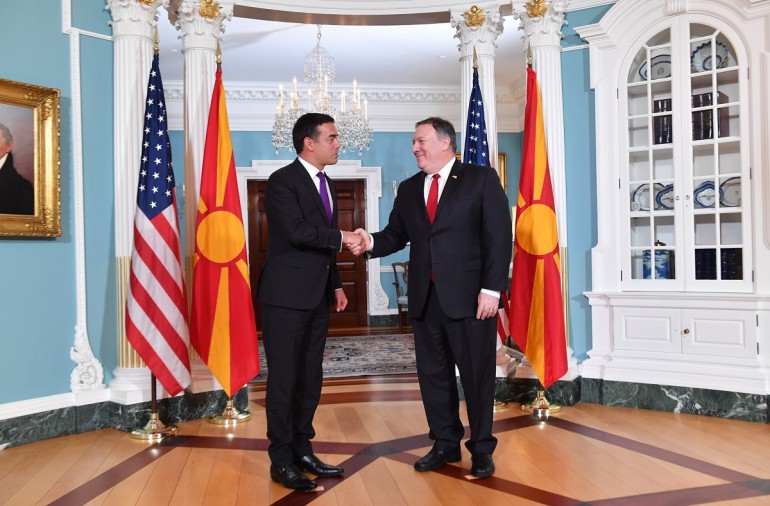 Dimitrov and Pompeo; Photo: Ministry of Foreign Affairs of Macedonia

WASHINGTON – “US supports our strategic efforts to join NATO and thinks that it is good for the region, good for us, for US interests, which mainly are stability in the Balkans. The main message was a huge encouragement”, said Foreign Minister of Macedonia Nikola Dimitrov in his interview for MIA, following a three-day visit to Washington.

During the visit, he met with the US Secretary of State Mike Pompeo, Senators Bob Corker, Jeanne Shaheen and James Risch, as well as US Deputy National Security Adviser Mira Ricardel. All of them expressed support for Macedonia-Greece Prespa agreement.

In order to enter into force, the Agreement needs to be accepted by the citizens of Macedonia in a referendum, scheduled for 30 September. Asked about the threat of fake news in the campaign, Dimitrov said that it is a phenomenon that burdens the entire world, but that the situation is even grimmer in the region.

“We are fertile ground for fake news, not only in Macedonia, but generally in the Balkans. We are fond of conspiracy theories. This is a big challenge for our democracy, because if citizens are not informed, democracy does not work”.

In the past months, Russia has been accused of trying to undermine Greece-Macedonia agreement. Reflecting on that fact, Minister Dimitrov stated that fake news are obviously orchestrated, but that he does not know whether they are coming from one centre. As for fighting possible cyber attacks, he emphasised that Macedonia has excellent cooperation with the US State Department when it comes to that issue.

He also stated that his country wants to have good relations with Russian Federation, saying that NATO path, supported by the majority of citizens, is not necessarily a path of enmity towards Russia.

In the conclusion of the interview, Dimitrov underlined what he sees as the most important advantages of joining both NATO and EU: protection of borders, stability, investments and increased standard of living.