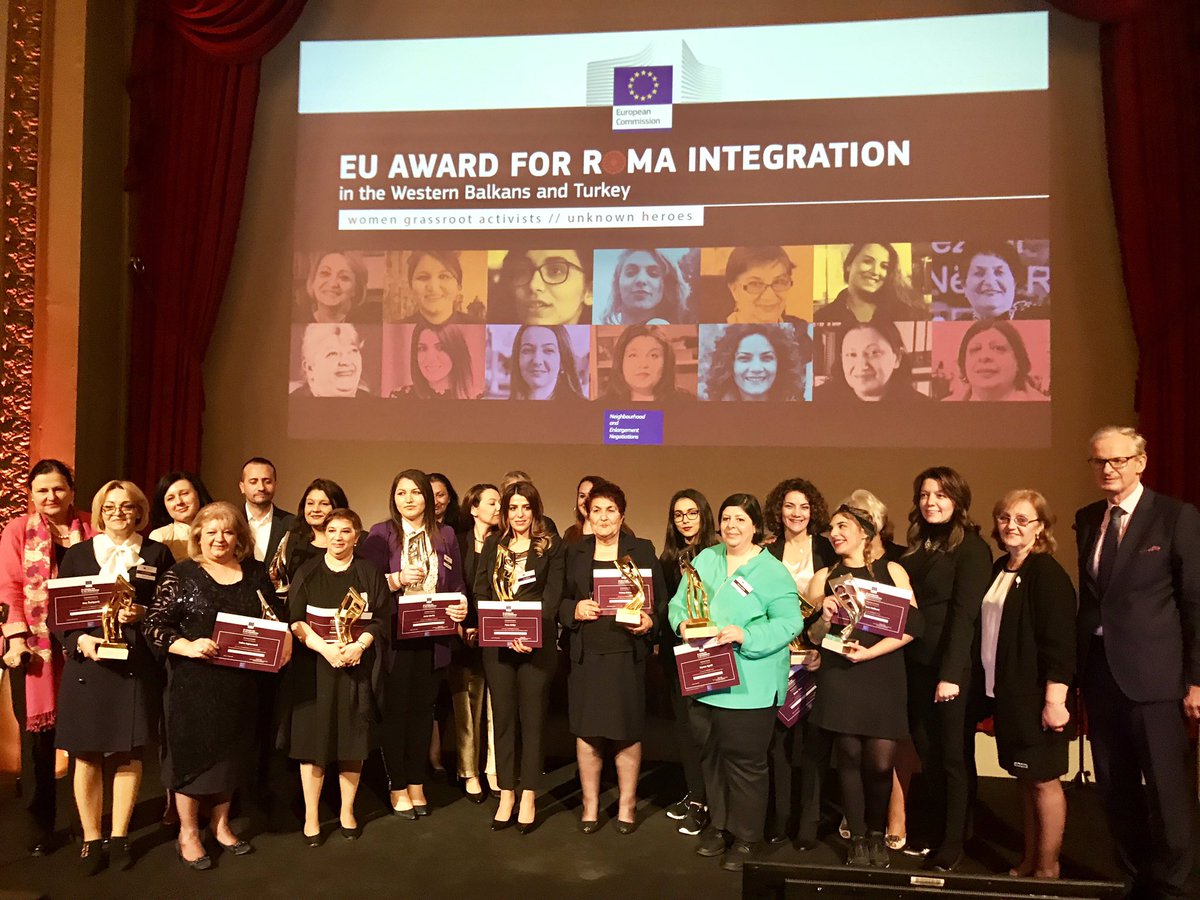 EU Award for Roma integration in the Western Balkans and Turkey; PHOTO: Twitter/@DanielssonEU

BRUSSELS – The European Commission announced yesterday the winners of the Third EU Award for Roma Integration for the Western Balkans and Turkey in an official ceremony.

Launched in 2014, the EU award for Roma integration for the Western Balkans and Turkey aims at highlighting the political importance of Roma integration in the EU enlargement process, to enhance the role of key players such as civil society, Roma youth and this year Roma women, and to show the EU’s determination and commitment to enhance social inclusion of Roma people.

Johannes Hahn, EU Commissioner for European Neighbourhood Policy and Enlargement Negotiations, commented: “Through this year’s award, the EU honours Roma women activists, drivers of change, whose commitment contributes to promoting a more inclusive society. Advancing women’s leadership and economic empowerment is an absolute priority for the European Union. We are promoting gender equality and women’s empowerment in all aspects of our policies both inside and outside the EU as this is for the benefit of all. Our support to minorities including Roma women and their empowerment is crucial for building more equal and just societies.”

Of the estimated 10-12 million Roma living in Europe, about 1 million live in the Western Balkans and about 2.8 million live in Turkey. The Roma share a rich culture and history, which is inextricably linked to Europe. But they have also faced a long history of poverty and exclusion. Although being equal citizens, too many are still victims of racism, discrimination, social exclusion and live in deep poverty. Improving the inclusion of Roma people therefore continues to be a key priority for the EU and effective integration became one of the conditions that enlargement countries have to fulfil in order to become a Member State.

Out of 105 applications submitted, 14 Roma women have been selected for their contributions to the inclusion, integration and empowerment of Roma in their communities and societies. The nominees often put themselves at risk by being role models and breaking established traditions.

The commitment shown by these strong women has already brought tangible impact on Roma integration and should inspire future efforts to continue the good work. By honouring these persons, the EU supports efforts to empower Roma to become full members of their wider societies. The winners received prizes, which will help them continue their engagement in support of Roma integration.

Director General of the EU Directorate for Neighbourhood Policy and Enlargement Negotiations Christian Danielsson wrote on Twitter that he is honoured to award the 2019 Roma Award for the Western Balkans and Turkey.  “This year’s award is dedicated to women to grassroot activists, true drivers of change advancing inclusion, women’s leadership, integration and empowerment of Roma in their communities”, Danielsson wrote.

Previously, the award was given to two other crucial actors in Roma integration: Roma civil society organisations and Roma youth.

“Macedonian Scenario” unraveling in Serbia, but not the one Vučić has in mind

Belgrade Pride: Serbia will respects the rights of all citizens