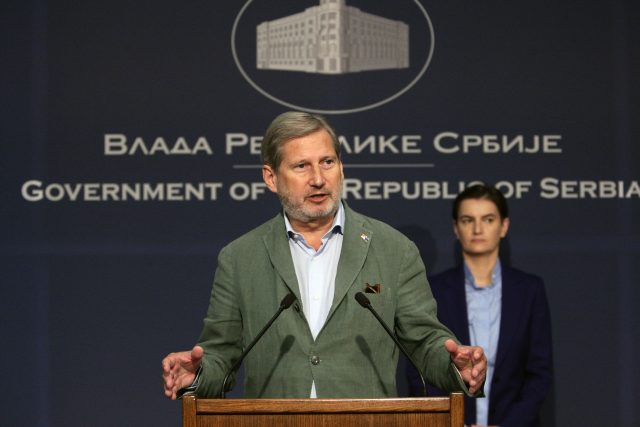 He did not want to go into details about the position he will receive in the Commission of Ursula von der Leyen, for which he has been nominated by the Austrian government, but he did express his opinion that it would be useful for him to carry on in the area of foreign relations.

According to him, the new President of the European Commission will also be committed to the European perspective of the region.

Hahn has payed a two-day visit to Belgrade, during which he met with the President Aleksandar Vučić and Prime Minister Ana Brnabić, with whom he also attended Youth Sports Games manifestation with the participants from Serbia, Croatia and Bosnia and Herzegovina.

Cross-party dialogue in Parliament is of great importance

During the joint press conference with Prime Minister Brnabić, Commissioner Hahn stated that it is too early for him to estimate whether the recommendations of the annual EC Report published less than two months ago have been implemented, but added that he is encouraged by Prime Minister’s announcements.

“Democracy, rule of law and fundamental rights are the key areas and I am really encouraged with the announcements of the Prime Minister not only during the meeting but also now, at the press conference”, stated Hahn, referring to the Prime Minister’s comments mostly focused on the improvement of the work of the National Assembly.

The importance of this institution was highlighted by Hahn as well, who stressed that the Parliament should be a place for the political debate and that the democratic institutions in Serbia should be consolidated.

“I cannot stress enough how important the cross-party dialogue in the Parliament is, and I welcome the first positive steps, as well as the fact that the reports of the independent institutions have been discussed in the parliament for the first time in several years”, stated Hahn.

He also urged Serbia to implement ODIHR’s recommendations in the context of the forthcoming parliamentary elections in the spring of next year, emphasising the importance of pluralistic media scene, including local media.

“It is everything EU wants to support and be sure that we will continue to support you”, said Hahn.

Brnabić and Hahn confirmed that the have not tackled the Belgrade-Pristina dialogue in great detail, and the Commissioner expressed his hope that the political situation in Kosovo will become clearer after the snap elections announced for September.

During his speech, Hahn reflected on the events that have marked his mandate, including the Enlargement Strategy, Sofia Summit and reaching the progress with the North Macedonia.

“Last year was the important watershed, there has been progress in 2019, but even more could have been done”, he remarked.