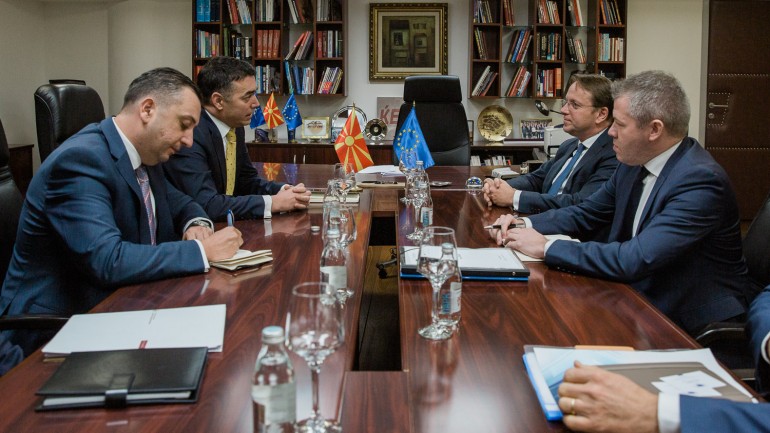 SKOPJE – North Macedonia is interested in publishing of the new draft methodology on enlargement as soon as possible and hopes that this will clear up all the dilemmas and will satisfactorily reflect the demands of all Member States to revive and strengthen the enlargement process, stated the Minister of Foreign Affairs Nikola Dimitrov.

Dimitrov met with the European Commissioner for Neighbourhood and Enlargement Oliver Várhelyi in Skopje yesterday, in the context of Várhelyi’s first official visit to the Western Balkans.

According to the press release of the Ministry, Dimitrov expressed gratitude to the public statements of European Commission President Ursula von der Leyen and Commissioner Várhelyi that North Macedonia has met the conditions and that the decision to start accession negotiations should be taken without further delay.

He added that, despite the immediate pre-election period and being in a technical capacity, the Government will do everything in its power to deliver further results in terms of implementing reforms with the EU benchmark.

“We believe that we have so far achieved a high level of readiness and alignment with EU legislation. North Macedonia does not shy away from tasks and more thorough assessment. On the contrary, it is eager to begin proving itself and does not mind stopping the process in the event of a setback. We will work closely with Commissioner Várhelyi on the next steps”, Dimitrov concluded.

Meeting with the party leaders

Várhelyi also met with the presidents of the biggest parties who will be leading them in snap election on 12 April, ex-Prime Minister Zoran Zaev of SDSM and Hristijan Mickoski of VMRO-DPMNE.

“Every day, every week, every month is important for the realization of the reforms that are important for us and for the EU. We look forward to the new methodology and believe it will have a fair approach and will be valued only by the merit system. Our main motive is still the EU, which has no alternative, and everything that depends on us will be done as it was before. Opening of negotiations with North Macedonia will mean a positive signal for our entire region”, said Zaev in the meeting, PlusInfo reports.

On the other hand, leader of VMRO-DPMNE’s Mickoski emphasized that the SDSM-led government has failed in the field of reforms and bringing the state closer to European standards. He noted that the key problem facing the country are the crime and corruption.

Concerning the early parliamentary elections, the interlocutors agreed that a democratic and fair election cycle in which citizens will freely express their will is crucial for the future of our state and for our Euro-perspective.