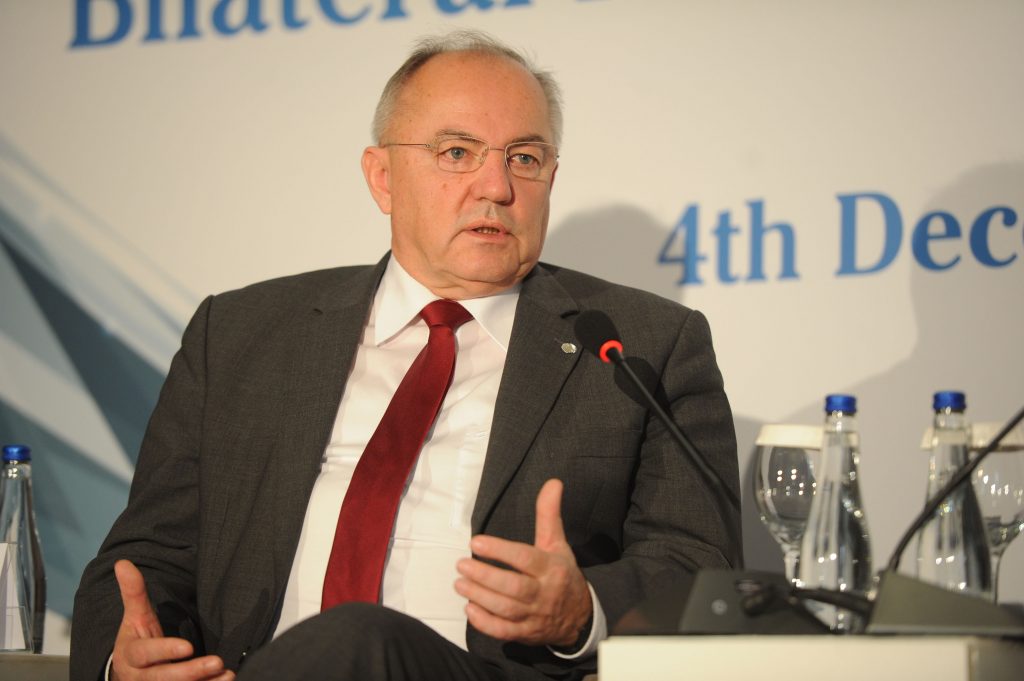 “My impression is that the European Union is Yugoslavia in the 1980s. The European Union needs more sovereignty against nationalism in response to right wing and populism, where groups of states have different visions”, said MP from the Social Democratic Party of Germany (SPD) and Bundestag Rapporteur for Southeastern Europe, Josip Juratović, during the Panel discussion “Serbia’s European Integration 2016-2020: How much progress have we made towards EU membership?” held in Belgrade, aiming to bring to the public the results of Serbia in the fulfillment of its obligations in the process of accession negotiations with the European Union since the beginning of the Government of Serbia’s mandate in 2016.

Asked if new winds are blowing from Brussels and Berlin that place the Western Balkans high on the EU agenda, Juratović replies that this is a region where political elites have made pluralism without democracy and where the powerful have shared power, in agreement only about the fact that they do not see eye to eye.

“Without proper relations in the region, social policy has no perspective. We knew that the only perspective if we wanted to protect workers’ rights was economic cooperation and economic space. CEFTA does not work, which is a prerequisite for joining the European Union. I don’t see how Mini-Schengen will work. The whole region is not in negotiations but in fulfilling the conditions for joining the EU and in the process of creating a functional state”, Juratović replies.

Juratović also said that the Berlin process has not brought much to the region so far, and believes that the problem is that during the summits within the process, the agreement is reached on certain issues, but that in the individual countries everyone still does ‘their own thing’.

However, he added that the establishment of the Regional Youth Cooperation Office has been the biggest success of the process so far.

Referring to the analysis of the situation in the region, Juratović said that the region had gambled away Europe’s confidence in the 1990s.

“I do not believe that anything will change until the war structures change in the region. A new generation must come with a clear stated goal that will build the future”, Juratović said, adding that everyone in the region and in Europe prioritized basic society issues – education, business and security, not the talks between Belgrade and Pristina, which are represented as if nothing is possible without it.

The new composition of the European Commission stressed that it remained absolutely committed to continuing enlargement and in this regard sent an encouraging message to the countries of the Western Balkans. However, the question remains whether this is a message from all countries and whether a new proposal for an enlargement methodology can provide support to countries that have not yet opened accession negotiations.

Juratović explains that it has not been realized in Europe that opening pre-accession negotiations is not an entry but the beginning of a process. “Opening the negotiation process does not automatically mean enlargement. France, the Netherlands and Denmark have their own internal problems, and the EU has unsettled relations between its members, which in practice turns Europe to “two-speeds” and distracts from enlargement. Due to the blockade of negotiations, democratic structures cannot begin with their initiatives and their work. Opening the process is a chance for the democratic forces”, says Juratović, adding that “we Democrats must support the consolidation of democratic institutions in solidarity, the future of Europe cannot be left to officials in Brussels, political will is needed”.

Asked if the Commissioner for Neighborhood and Enlargement Olivér Várhelyi is too optimistic when he says he hopes that by the end of his term at least one country will be ready to join the EU, Juratović replies that Várhelyi must give hope and perspective.

“I have so much hope, I hope that some democratic forces will be awakened here, where democratic values ​​will be at the forefront, where there will be freedom of the media, an independent judiciary and independent institutions. Experts can only function when the system is working”, commented Juratović.

Through investments towards European integration

An economic or in the other words investment package will also be presented at the Zagreb Summit in May, so the question is whether this is a reflection of the fact that without economic recovery there are no talks about European integration. Juratović replies that as far as assistance to the Western Balkans is concerned, Croatia cares about the EU becoming more engaged in the region.

“In terms of investments, it all comes down to the fact that we need joint projects and we need investors. What is important is a new generation that is not burdened by the past, who is ready and aware that the prosperity of all countries is possible through our mutual relations. In order for someone to invest in Serbia, they need Serbia to have a big market, because its market is small”, Juratović said, adding that there is a lot of talk about foreign investors, but why would foreigners invest if the domestic ones do not.

“It is very important to create functional institutions in order to attract investment and create a climate for entrepreneurs. Mini-Schengen is bypassing the CEFTA agreement because CEFTA does not work. Political structures work for smugglers and criminals, such as the case of blocking Kosovo from entering Interpol, as well as when Kosovo imposes 100% duty on goods from Serbia and BiH. Workers have to stand up and rebel over low wages and raise questions about their future”, Juratović concludes, adding that the German social system is collapsing without the workforce coming from the Western Balkans.

The event was organized by the Friedrich Ebert Foundation and the European Western Balkans portal, at which a group of experts analyzed progress in relation to specific negotiation chapters and significant areas within the process of Serbia’s accession to the European Union.