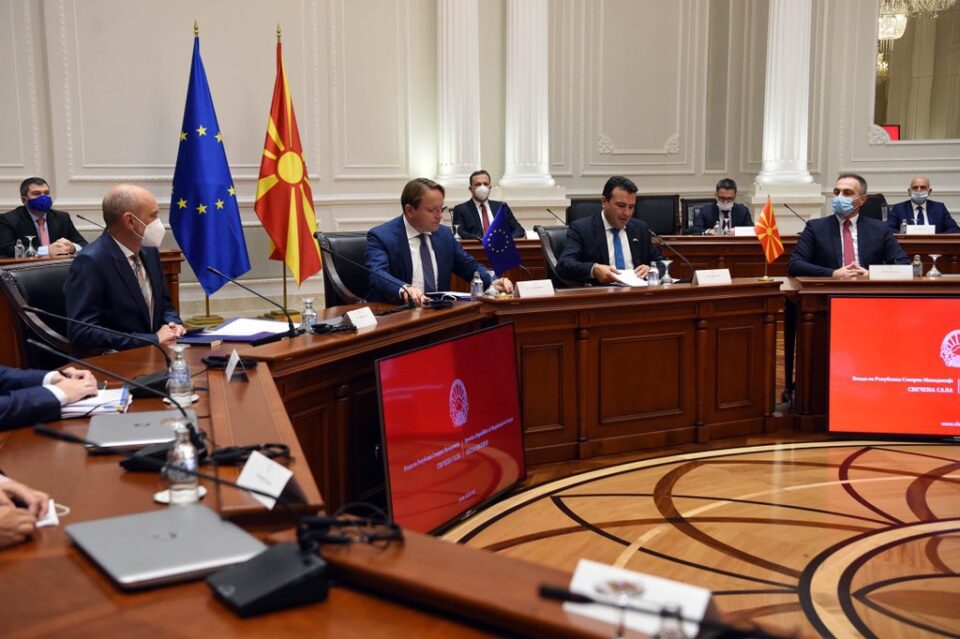 SKOPJE – EU Commissioner for Enlargement Olivér Várhelyi presented the Economic and Investment Plan and annual report on North Macedonia to the Prime Minister Zoran Zaev and the President Stevo Pendarovski during his official visit to Skopje today.

“We need to concentrate on getting the Plan implemented so we change the landscape of the country already in the coming years”, wrote Várhelyi on his Twitter account.

During his address in the Parliament of North Macedonia he said that the Economic and Investment Plan serves to spur the long-term recovery through a substantial investment package leading to sustained economic growth, implementation of reforms required to move forward on the EU path, and bringing the Western Balkans closer to the EU Single Market.

“North Macedonia is very much part of this plan and your citizens and businesses will directly benefit from it. However, boosting investment and economic growth in the Western Balkans will only be possible if governments firmly commit to and implement fundamental reforms based on European values”, Commissioner for Enlargement underlined.

The Deputy Prime Minister for European Affairs of North Macedonia Nikola Dimitrov tweeted that the substantial Economic and Investment Plan is a major opportunity for the Western Balkans.

The substantial Economic&Investment Plan is a major opportunity for the Western Balkans. We should respond with further fundamental reforms, swift implementation and regional economic integration. Onwards and upwards! https://t.co/rxBhlZCMOf

Várhelyi: I hope that first IGC will be held during German presidency of the EU

Commenting on the EC report on North Macedonia, Várhelyisaid that the decision to open accession negotiations earlier this year was truly historic for North Macedonia.

“The country has maintained a steady pace of progress and further delivered on key areas of rule of law, including the judiciary, fight against corruption and organised crime. It is important that you keep up this momentum. The fight against corruption needs to continue unabated and further efforts are needed to ensure full respect for the principle of transparency and meritocracy in the Public Administration Reform”, Várhelyi underlined.

He added that he is encouraged by the commitment of the new government to further advance the EU reform agenda, in particular in the key areas of the fundamentals.

“More generally, it is important to have clear coordination and work planning between the government and the Assembly. You need to know what EU related laws or reports are coming your way, to properly plan the work of committees and plenary, also to play your role in supporting and monitoring the negotiation phase”, said Várhelyi.

He added that he hopes to see the negotiating framework with North Macedonia agreed on and first IGC held still under the German presidency of the EU.

Zaev: The EC report provides a clear picture of the country’s progress

Prime Minister of North Macedonia Zoran Zaev said that the Economic and Investment Plan as well as the 2020 Enlargement Package are two extremely important documents for the EU agenda of the Republic of North Macedonia.

“They will contribute to creating a strong political momentum for a final step in the country’s European agenda, starting the negotiation process in accordance with the new methodology and entering a new higher phase in achieving our strategic goal – EU membership. The EC report provides a clear picture of the country’s progress, but also of areas where further improvement and harmonization with European standards is needed”, said Zaev.

He added that financial support of 9 billion euros through IPA III will send a strong message of support for the EU perspective of the region and for the complementarity of the reform processes with the accelerated economic development.

Dimitrov: We can and should be satisfied with the overall assessment of the European Commission

The Deputy Prime Minister for European Affairs of North Macedonia Nikola Dimitrov held a joint press conference with the Head of the EU Delegation to North Macedonia David Geer yesterday, during which the EC Progress Report was presented.

Dimitrov reminded that the reporting period was full of challenges that necessarily affected the dynamics of reforms: “Besides the pandemic, we had a technical government without a political mandate and a dysfunctional Assembly for a long time. However, even in such restrictive conditions, North Macedonia has made progress. We can and should be satisfied with the overall assessment of the European Commission”, said Dimitrov.

“North Macedonia has proved in recent years that it is not afraid and does not retreat from challenges and therefore, we are ready in partnership with the European Commission, the EU Delegation, Ambassador Geer, to respond to all tasks until the decisive achievement of the common goal – membership in the European Union”, Dimitrov concluded.

The Head of the EU Delegation to North Macedonia David Geer said that the country report published yesterday notes steady progress in reforms, including in the area of rule of law.

“It is important to maintain momentum. Implementation of laws and standards is crucial”, Geer wrote on his Twitter account.

Borrell: Europe is not complete without the Western Balkan

Hoti on the EC report: Progress has been made despite difficulties