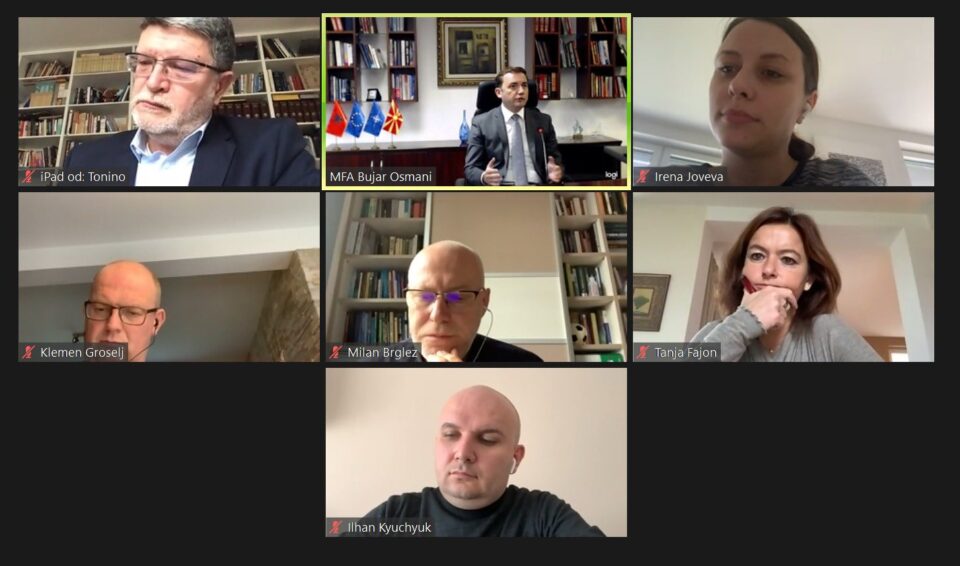 SKOPJE – North Macedonia will continue with all its efforts to seek reasonable solutions for overcoming any differences with Bulgaria and remains committed to the reform process and all other segments that are a part of our European integration priorities, said Foreign Minister of North Macedonia Bujar Osmani, during the video-meeting with the members of the informal parliamentary group “Friends of North Macedonia”, led by Irena Joveva from Slovenia, it is stated in a press release.

The “Friends of North Macedonia” group consists of about 30 MEPs from Slovenia, Croatia, Austria, Bulgaria, Greece, France, and Germany..

Voicing gratitude to the members for their voluntary activity and direct involvement in the promotion of North Macedonia in the process of European integration, Osmani expressed conviction of the future fruitful cooperation between the institutions of his country and the European Parliament on the path to opening and leading accession negotiations and the full integration of his country in the European society.

“North Macedonia will continue with all its efforts to seek reasonable solutions for overcoming any differences with Bulgaria and remains committed to the reform process and all other segments that are a part of our European integration priorities. Furthermore, we still think that there are considerable chances, if we utilize the period ahead productively, to hold the first Intergovernmental Conference during the German Presidency”, Osmani emphasized, informing the parliamentarians about the current developments related to the European agenda of the country.

The parliamentarians reaffirmed the strong support for the European perspective of North Macedonia.

The European Parliament as an institution remains positive to the enlargement policy, including the start of accession negotiations with North Macedonia, which it regularly calls for in its resolutions.

MEPs stressed the importance of the continuity of the reforms for creating a positive atmosphere for the start of negotiations, whereupon the continuation of the Jean Monnet dialogue was announced in order to intensify the cooperation between political parties, aimed at inclusivity of the negotiation process.

Emphasising the importance of geopolitical aspect for the EU enlargement in the region, it was unanimously agreed that the Western Balkans is important not only for the security and stability of the EU, but for the overall continuity of economic, political and social progress.