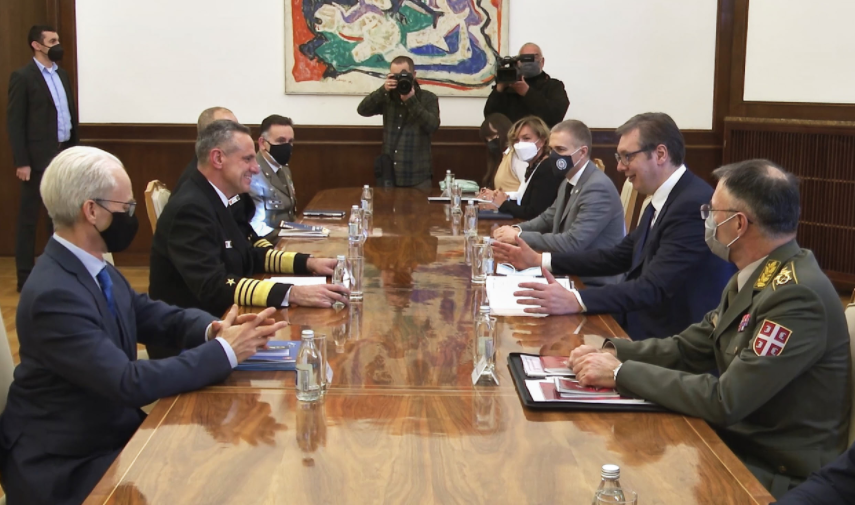 BELGRADE – President of the Republic of Serbia Aleksandar Vučić met yesterday with Admiral Robert Burke, Commander of the Allied Joint Force Command in Naples, with whom he discussed forms of cooperation between Serbia and NATO, within the Serbian policy of military neutrality of Serbia,  states on the President’s official website.

Vučić pointed out that, in addition to the fact that Serbia has been a member of NATO’s “Partnership for Peace” program for fifteen years, regular dialogue between our country’s representatives and officials of the alliance’s political and military structures has been established, which has strengthened mutual understanding and mutual trust.

Given that the NATO Joint Forces Command in Naples is in charge of KFOR, Vučić said that members of that mission have an important role in maintaining peace and stability, as well as in protecting Serbs and other non-Albanian communities in Kosovo and Metohija.

He also emphasized the importance of scientific and technological cooperation projects, as well as cooperation in other areas, especially in the field of civil protection and emergency situations, within which Serbia hosted the largest NATO exercise ever organized in 2018 with about 2,000 participants from countries. NATO member and partner.

The importance of the participation of members of the Serbian Army in the international missions of the UN and the EU was emphasized in the conversation, which contributes to peace and stability in different parts of the world. President Vučić sent greetings to NATO Secretary General Jens Stoltenberg and thanked him for his readiness to listen and understand Serbia’s views.

Admiral Burke pointed out that NATO values Serbia as its partner and respects its military neutrality. He mentioned a significant number of held and planned joint activities, which also contribute to the readiness of members of the Serbian Army. In addition, he stressed the importance of Serbia for peace and stability in the region.

Admiral Robert Burke was on the official visit to Belgrade for the first time since taking over as Commander of the Allied Joint Force Command in Naples. In addition to Admiral Burke and President Vučić, the meeting was also attended by the Chief of the General Staff of the Serbian Army Milan Mojsilović, the Minister of Defense Nebojsa Stefanović and the Head of the NATO Military Liaison Office in Belgrade Tommaso Vitale.