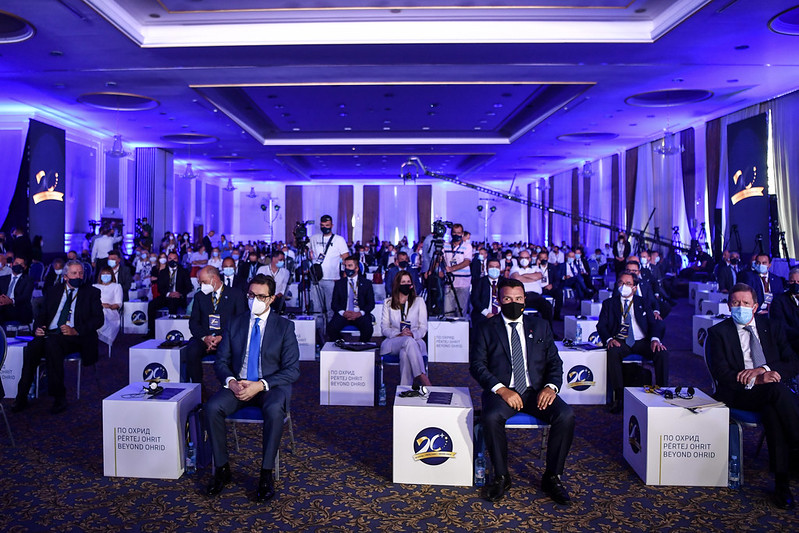 SKOPJE – The Government of North Macedonia marked the twenty-year anniversary of the 2001 Ohrid Framework Agreement today with a conference “After Ohrid” in Skopje.

Ohrid Framework Agreement, signed on 13 August 2001, marked the end of the civil conflict that led to 100 deaths and thousands of civilians being displaced. The conflict, which started in the early months of 2001, pitted the ethnic Albanian UÇK—M forces against the security forces of then Former Yugoslav Republic of Macedonia.

Following EU and US mediation, Macedonian and Albanian leaders signed the agreement, under which the UÇK—M surrendered its armaments to a NATO mission. Later that year, the parliament adopted sweeping constitutional changes to empower ethnic communities in local and national politics, the public sector and education. Representation in the judiciary, police and civil service was to be proportionate to the share in the overall population.

In his speech at the “After Ohrid” conference, President of North Macedonia Stevo Pendarovski reminded that there was a number of ethnic Macedonians opposed to the Agreement.

“Their position stemmed from the fear that the implementation of the Framework Agreement would pave the way for rapid disintegration of the country because for the Albanians, allegedly, Macedonia is only a transit entity. However, what happened in the following years showed that although the potential of the agreement to strengthen cohesion in society as a whole is not great, the fact is that with each phase of its implementation, internal confrontations did not increase, but, on the contrary, decreased along ethnic lines”, Pendarovski said.

He added that it was decisive that those who signed it did not intend to fake its realization and to say one thing in front of foreigners and another to do in front of their domestic electorate.

“Of course, a critical precondition was the synchronization of the European and Atlantic part of the Western alliance, which happened in time, unlike the Balkan conflicts in the 1990s”, said Pendarovski.

Prime Minister Zoran Zaev stated that citizens of North Macedonia have taken all necessary measures to build an integrated society that is firmly based on the rule of law.

“Our country is building mature policies. Instead of conflicts, we talk about advancement, about economic progress in our country and the promotion of good neighborly relations. Together with our neighbors, we are creating an ‘Open Balkans’, overcoming all obstacles and releasing all ideas for free connection of all our citizens,” said Zaev.

He stressed that the Government, four years ago, fulfilled the obligation that was unnecessarily protracted for more than a decade and adopted the Law on the Use of Languages, completing the provisions of the Ohrid Framework Agreement.

Opposition VMRO-DPMNE accused the ruling SDSM of politicising the event, declining to participate in it.

The party demanded that the government answer whether the the postponement of the epidemiological measures for the sake of the conference proves the complete politicization of the process and at the same time the false care for the health of the citizens.

“VMRO-DPMNE or President Mickoski will not participate in such a decor. There is no need for a party pre-election parade in conditions of severe economic and health crisis, the framework agreement is a done deal. The money could be used for many other purposes”, the party stated, PlusInfo reported.