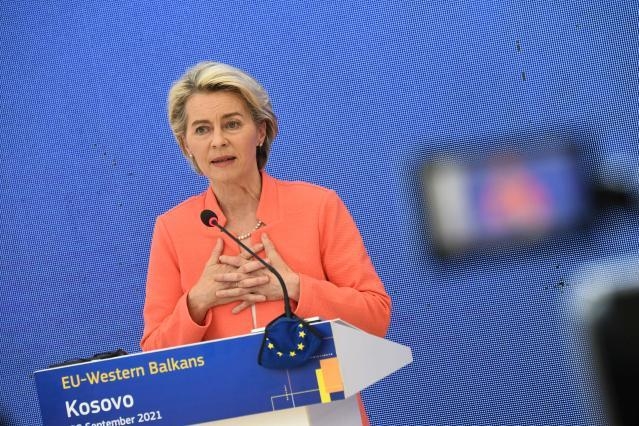 PRISTINA / PODGORICA / BELGRADE – Throughout her second day in the Western Balkans, during which she visited the capitals of Kosovo and Montenegro before arriving to Belgrade, President of the European Commission Ursula von der Leyen has continued to send messages of the region’s future in the EU.

These messages come against the backdrop of Reuters article about a supposed impasse over the wording of the Declaration which is expected to be adopted at the EU-Western Balkans Summit in Slovenia next week.

The article, which has since been widely reported across the region, claims that there has been a dispute over the wording of an “unequivocal support for the European perspective of the Western Balkans”, which has previously appeared in 2018 Sofia declaration and 2020 Zagreb declaration.

European Commission has since reacted to the article, with Spokesperson Ana Pisonero saying that the „enlargement policy is a strategic investment in the stability and security of Europe,“ adding the EU leaders had reiterated they were unequivocally committed to the European perspective of the Western Balkans.

She also said that it was  crucial to support the integration within the region.

“All six partners must move forward quickly on the common regional market. This is a precondition for growth and for a strong economic development. And it is key to get the maximal benefit from the economic and investment plan and to progress in the European integration process”, von der Leyen stressed.

During her visit to the capital of Montenegro, she made a similar statement.

“Montenegro is the most advanced country in the EU accession negotiations. And we want that to continue. You owe it to your people, we owe it together to our people. We, especially, owe it to those young people here in Montenegro, who dream of a European future. And they are right if they have that dream, we want that really to come true”, she said during a press conference with President Milo Đukanović.

We are creating a partnership for the future with the Economic and Investment Plan for the Western Balkans.

The EU is ready to support transport projects to better link Podgorica with the region.

In Pristina, von der Leyen visited Cicërimat Kindergarten, which was built with EU funds. In Montenegro, she visited the Institute of Public Health which received EU support in the fight against the pandemic.

As during her visits to Albania and North Macedonia on Tuesday, von der Leyen emphasised the assistance Kosovo and Montenegro received from the EU as well, in terms of COVID vaccines, economic support and investment.

In the evening, von der Leyen arrived in Belgrade, where she was received by President of Serbia Aleksandar Vučić, with whom she will attend the ceremony of launching an EU-supported railway project tomorrow morning.

During her press conference with Albin Kurti, Ursula von der Leyen confirmed that she had been discussing current crisis with the Kosovo Prime Minister.

“I must say that I am very concerned about the current crisis. It is important to de-escalate and to return to the negotiating table to find a sustainable solution. And the only way to do that is the EU-facilitated Dialogue. That is the only platform to resolve the current crisis. We will stay in touch, we have discussed that, because I want to see Kosovo progress and this is only possible through cooperation. So let us work together on that”, she said

Kurti expressed hope that a solution will be found. “We have expressed that readines at Monday’s meeting with the KFOR commander,” he said. According to Kurti, the Kosovo Serbs agreed to the removal of their barricades and the replacement of police special units with KFOR troops but that “there is an individual in Serbia who speaks the language of the 1990s”, alluding to Serbian President Aleksandar Vučić, N1 reports.

“Serbia receives donations from the EU but continues to be militarized by Russia and China.”  Kurti also said that the attacks in Zubin Potok are a consequence of Serbian President Aleksandar Vučić’s provocative statements.

“I have demanded that the attacks in Zubin Potok and Zvecan be condemned as they came after the provocative statements of the president of Serbia and after the military show of force at the border with Kosovo,” he said, GazetaExpress reports.

Lajčák meets with Bislimi and Petković, discussions to continue throughout the day