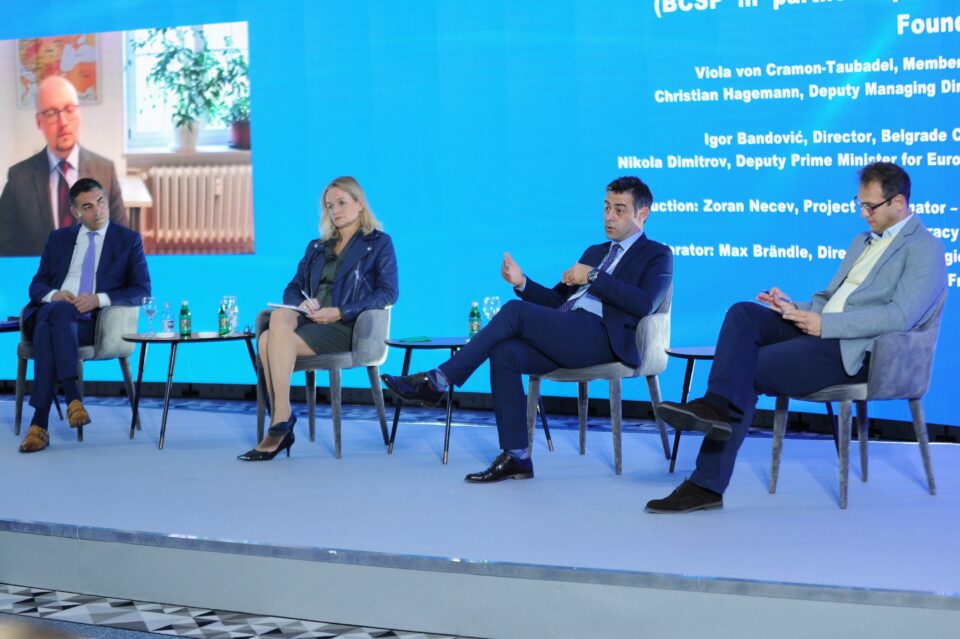 BELGRADE – The Berlin process reconciled political leaders, found ways for their communication and the continuation of the Berlin process is necessary, it was concluded panel “The Berlin Process – What’s next?”, at Belgrade Security Forum (BSF).

Member of the European Parliament Viola von Cramon-Taubadel said that the Berlin Process is a good additional platform because it will put more focus on the region of the Western Balkans.

“The citizens of the Western Balkans have a real frustrating promise that has not been fulfilled in the way they expected”, said Von Cramon, adding that the French President mentions the region only when dealing with domestic policy, and it is similar in other members of the Union.

She pointed out that the German Greens mentioned the enlargement of the Western Balkans in their program during the election campaign, adding that she hoped that the new government in Germany will continue the Berlin Process.

“I hope that we can continue the Berlin Process, invest a little more energy, and I hope that the new German chancellor will not go to Belgrade, but Montenegro and North Macedonia, where there is really progress”, Von Cramon said.

She explained that Serbia is a candidate country that is negotiating EU membership, but bad assessments about the collapse of democracy, the rule of law, and freedom of the media also come from Belgrade.

The Deputy Prime Minister of North Macedonia for European Affairs, Nikola Dimitrov, said that the region of the Western Balkans is in the “yard of the EU” and that the goal of the Berlin Process is a peaceful, stable and democratic future for the region.

He said that there were not many changes on the ground of enlargement –  Serbia and Montenegro were not opening chapters, North Macedonia and Albania were not starting a negotiation, and there was no visa liberalization for Kosovo.

“It is important for the EU to bring its winning box because if it does not fulfill its part, neither the pro-European and pro-reform forces can fulfill their part, and in the upcoming local elections, they will not win”, Dimitrov said mentioning the local election in North Macedonia.

Dimitrov said that the benefit of the Berlin Process is the abolition of roaming and the establishment of the Youth Office (RYCO), although citizens do not always recognize that as a result of that process, and what will affect citizens will be the formation of a Common Regional Market.

The director of the Belgrade Center for Security Policy, Igor Bandović, believes that the Berlin Process had its role, but he made the countries of the region be seen as children who need the presence of their parents in the room “in order to behave”.

Speaking about the future of the Berlin Process, Bandović said that the question is whether we are mature enough to take responsibility and ownership of those processes.

“Unfortunately, we have not reached that framework and conditions,” said Bandovic, illustrating this thesis with a dialogue between the parties in Serbia, civil society, the media, the crisis in relations between Serbia and Kosovo, or the situation in Bosnia and Herzegovina”, he said.

Bandovic said that the European future is still just a dream, and the Berlin Process is a reality, and through that process, he would like to see a greater transformation of countries in the region, primarily in the quality of life of citizens.

Christian Hagemann, deputy managing director at Southeast Europe Association,  said that after the seven summits of the Berlin Process, the weaknesses of that process can be seen.

“The process brought about the formation of RYCO, the roaming agreement, the Prespa agreement, but the region has not changed substantially, and democracy and the rule of law have not been promoted in those countries,” Hagemann said.

Zoran Nečev, a researcher at the Institute for Democracy Societas Civilis, briefly presented the Berlin Process initiative and its most important results.

“The Berlin process paved the way for resolving the issue between Northern Macedonia and Greece, and after 68 years, Edi Rama was the first prime minister of Albania to visit Belgrade and talk with President Aleksandar Vučić, so now their meetings are quite common,” Nečev said.

“We will see if the process will continue after German Chancellor Angela Merkel retires. In case it continues, it must focus on “finding political will” among the EU member states in order for the Western Balkan six to progress in European integration,” Nečev pointed out.

Comparing the Open Balkans initiative with this process, Nečev said that “being open” does not mean that it is transparent, nor are all six partners from the region in the project.