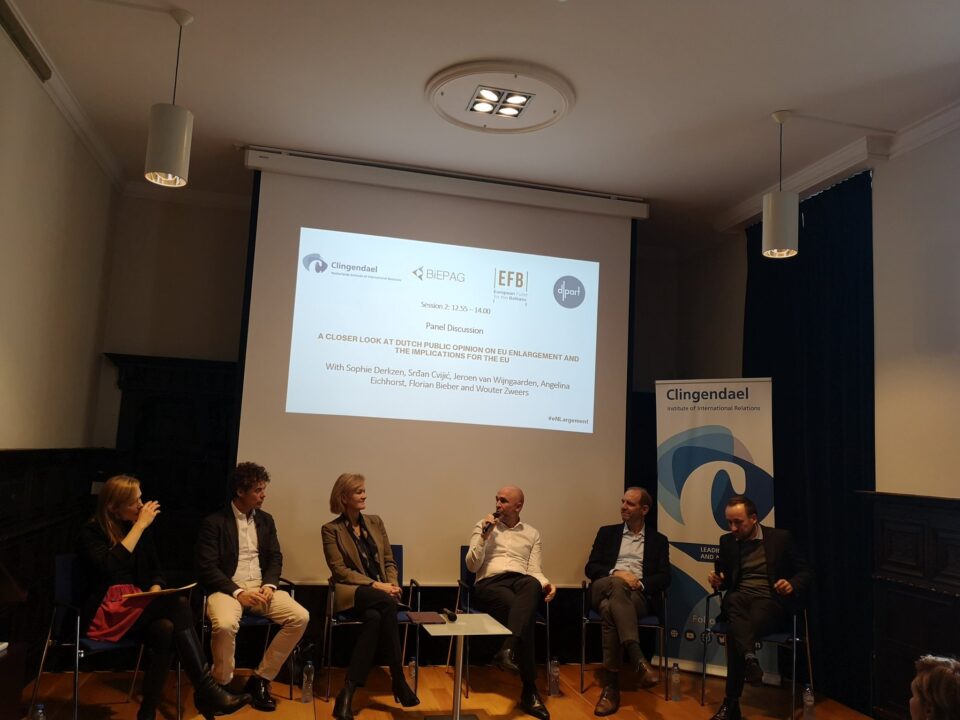 THE HAGUE — Results of the study showing that 45% of Dutch citizens approve of EU enlargement in the Western Balkans present a positive development, but there is still need to improve communication on the enlargement policy with Dutch citizens, as the panelists concluded during the discussion which followed presentation of the study “Strict, Fair and More Open Towards EU Enlargement! Dutch Public Opinion on EU Membership of the Western Balkans.”

The discussion, organized by the Clingendael Institute, European Fund for the Balkans (EFB), Balkans in Europe Policy Advisory Group (BiEPAG) and d|part, focused on the actual level of scepticism for EU enlargement in the Netherlands with the reference to the research, as well as the possibilities for further improvement of the perception about the Western Balkans by the European public and its significance for the enlargement.

Panelists also discussed the salience of the issue for the Dutch voters and whether there is a dissonance between the public opinion and the politicians’ behavior regarding this issue. Another conclusion of the study which was mentioned was that there is a different perception towards enlargement when it comes to the Western Balkans and to Turkey.

Angelina Eichhorst from European External Action Service (EEAS) said that she is pleasantly surprised by the results of the research and that the data could help with the work on enlargement being done in Brussels.

“It gives me hope that there will be more understanding in the Netherlands why enlargement is important and why Southeastern Europe and Eastern Europe are a part of our family,” Eichhorst stated.

She also emphasized the importance of communicating to the EU citizens “how the process actually works,” as well as the support for EU integration among citizens of the Western Balkans.

Member of Dutch Parliament and vice-chair of the parliamentary committee for Defence, Jeroen van Wijngaarden, stressed the importance of knowing the Western Balkans region for the approval of the EU integration, which is another link that the study demonstrated. He added that he thinks the dissonance between the polls and the politicians’ attitude might come from “different responsibilities.”

“As an elected politician, I always have to bear in mind responsibility that was given to me on behalf of my constituents and there are two major issues they are worried about — foreign policy and migration,” he explained.

Regarding the criteria alignment, Van Wijngaarden said that he would “rather be blamed for being too strict than being too fair,” because he sees “enlargement and alignment as two sides of the same coin.”

Florian Bieber from the Balkans in Europe Policy Advisory Group explained that this research goes beyond the surface, unlike some researches like Eurobarometer which ask the citizens about enlargement in general, without referring to specific countries or accession timeframe. That actually shows “there is a lot less scepticism for the Western Balkans if you dig a little deeper.”

“If we can show in the Netherlands that it’s more complicated than just outright scepticism, then this is a message for all other countries where people think their publics are sceptical while they might be more open,” as Bieber pointed out.

He also emphasized the importance of political will for enlargement and that politicians “should not hide behind citizens as an excuse not to take this process seriously.”

EU enlargement is of low salience for the Dutch public, research shows

One of the authors of the study, Srđan Cvijić from Belgrade Centre for Security Policy, said that the most important conclusion of the study is that “this issue is not salient politically” and that the stance on the EU enlargement to the Western Balkans “is not going to shape how people vote.”

He added that the approval of enlargement depends of the perspective, because judging by the labour market, respondents view enlargement positively, but on the other hand they fear that enlargement would exacerbate housing crisis. Personal connections to the Western Balkans region are very important for positive perception of the enlargement, so he recommended promotion of the countries through tourism or economic cooperation.

He also compared the results to a previous study done in France two years ago.

“In the Netherlands, the major factor that could change opinion of those who were against enlargement was the observance of criteria, while in France it was geopolitics,” as Cvijić pointed out.

Wouter Zweers, researcher of the Clingendael Institute, said that “it’s not useful to classify countries at large as fully sceptical,” but instead it should be asked whether they are sceptical or just critical.

While he acknowledged “there is a certain scepticism on political level,” Zweers assessed that in the Dutch Ministry of Foreign Affairs “there is quite an effort to be engaged in enlargement.” On the other hand, he pointed out visa liberalization for Kosovo or opening of the accession negotiation for North Macedonia as examples of the Netherlands being “too hesistant.”

He agreed that there is a need to communicate more to the citizens about the functioning of the enlargement process, but also about the EU itself, as well as about the Western Balkans countries.

EU enlargement is of low salience for the Dutch public, research shows