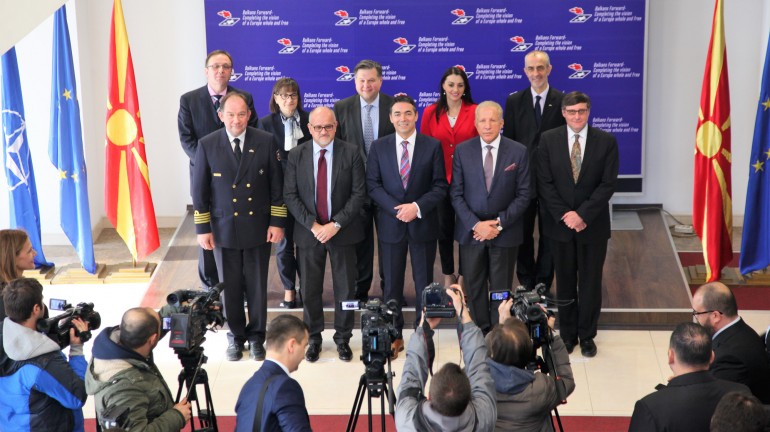 US - Adriatic Charter; Photo: Ministry of Foreign Affairs of Macedonia

SKOPJE – Minister of Foreign Affairs of Montenegro Srđan Darmanović took place in the ministerial meeting of the US-Adriatic Charter (A5) in Skopje earlier today, which also represented the final activity within the Macedonian chairmanship of the Charter, which will be taken over by Montenegro in January 2018.

Ministers of Foreign Affairs of Macedonia, Albania, Croatia, Montenegro, Bosnia and Herzegovina and the United States, as well as observers Slovenia, Serbia and Kosovo participated in today’s meeting.

Minister Darmanović congratulated Macedonia on the successful chairmanship of the Charter, stressing that it was of particular importance to Montenegro, bearing in mind that during that term the country became a member of the Alliance.

He noted that the interest of all A5 members and observers is a long-term stable and prosperous Western Balkans, and that European and Euro-Atlantic integration, as well as the strengthening of regional cooperation, are the best guarantors for achieving this goal.

He said that the US-Adriatic Charter was one of the most important regional mechanisms for cooperation in the field of security and integration, and that this was demonstrated during the entire Macedonian presidency. In that context, he recalled the Summit A5 held in August 2017 in Podgorica, when US Vice President Mike Pence and heads of state or government of the countries of the region confirmed their strong commitment to integration processes in the Western Balkans.

Head of the Montenegrin diplomacy stressed that Montenegro, while chairing the Charter, will be committed to promoting the Euro-Atlantic aspirations of the countries of the region and will actively assist in the implementation of reforms and fulfilling the criteria for their membership in NATO.

Foreign ministers exchanged views on the current political situation in the region and the security challenges, reaffirming commitment and joint efforts aimed at a stable and prosperous Southeastern Europe.

At the meeting, the various aspects of the past and future cooperation of the countries of the Charter were discussed, with special emphasis on the further joint activities in several areas, primarily their contribution to strengthening the security at the regional and global level, as well as initiating joint projects with other forms of regional cooperation.

The ministers devoted special attention to the Euro-Atlantic integration processes of the Region and their importance to its stability and prosperity.

Marović: Number of opened chapters is not an indicator of Montenegro’s success

US State Department: Lack of coordination in WB creates fertile ground for terrorism