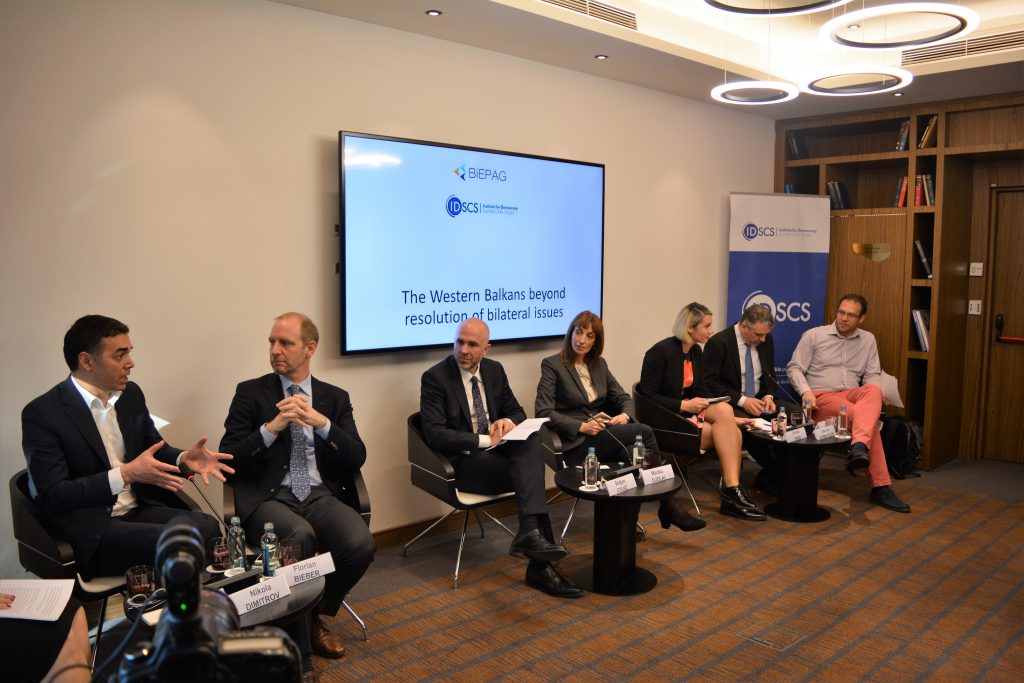 Different aspects of bilateral relations and disputes in the Western Balkans and possible directions of resolutions and cooperation between the countries were debated at the panel discussion organized by Balkans in Europe Policy Advisory Group (BiEPAG) and the Institute for Democracy ‘Societas Civilis’ (IDSCS) titled ‘The Western Balkans beyond resolution of bilateral issues’ that took place in Skopje on Friday, 29th of March.

The panel discussion was opened by Marko Trosanovski, president of Institute for Democracy ‘Societas Civilis’ who said that bilateral disputes in the region are far from being solved but that there are also other challenges in the region, considering the rule of law, fight against organized crime corruption and public administration.

According to the key-note speaker, the Minister of Foreign Affairs of North Macedonia, Nikola Dimitrov, a resolution of issue is supposed to create a friendship and not frustration, and in order for that to happen the interest of the neighbor needs to be taken into account as well.

“For us, as a government, it was important to find the key from the waiting room. So to do that, we went to our neighbors and said, we have thirst, hunger to do better, we want to move forward. The problem is that there is a lack of knowledge of the situation in the other country. Debates in both countries, still today are focused on the negative perspective. We need to somehow balance the domestic debate that will include the media, civil society. We need a lot of wisdom in what we say and how we say and we need a constant awareness that we address both public opinions”, said Dimitrov.

Any process of transformation is always going to be difficult, there will be failure and moments when you don’t get it right and there is no magic solution, said Florian Bieber, director of the Centre for Southeast European Studies, University of Graz and BiEPAG Coordinator. According to him, the EU integration is a tool, not a goal and it works if people use it as a way to achieve change in their society.

According to the panel’s second speaker, Marika Djolai, member of BiEPAG, all the bilateral issues are very sensitive and there are a lot of emotions around them.

“Even when people are on the same side, even when they have been working on the resolutions for a long time, a lot of expectations, desires or frustrations are packed into them and it’s not easy to communicate with all these difficult feelings if you don’t trust the participants or the process”, she stated.

Srđan Cvijić, senior policy analyst at the Open Society European Policy Institute, Brussels and member of BiEPAG, stressed that EU needs to open accession negotiations with North Macedonia as soon as possible and no later than June 2019. According to him, this will not only affect North Macedonia, but it will also affect the credibility of the entire enlargement process.

The panel then was addressed by Donika Emini, researcher from the Kosovo Centre for Security Studies who focused on the bilateral issue between Serbia and Kosovo. She said that in Kosovo no one actually dares to lead the process.

“The government in Pristina is deeply fragmented. It is easy to criticize the other political party that is part of the coalition. This is leaving a lot of space for partners in the coalition to basically criticize each other and act like an opposition and no one takes ownership of the process. We need to be sure that when we go back to Brussels we go prepared and we don’t sign an agreement we can’t implement”, stated Emini.

Ioannis Armakolas, senior research fellow at the Hellenic Foundation for European and foreign policy and assistant professor in comparative politics of SEE at the University of Macedonia emphasized that primary problem for Greece is and would remain Turkey. This was also the case even when the name issue was discussed with North Macedonia.

“Our politicians in rare moments of sanity actually admit that we should resolve problems with our neighbors in the Balkans. But that doesn’t mean we are more flexible with our Balkan neighbors compared to Turkey”, said Armakolas and added that very serious problem in Greece is the public opinion. According to him, the Prespa agreement is the most important thing that happened in the last 15 years in the region.

The final speaker of the panel was Zoran Nečev, senior researcher and coordinator of the Center for EU integration, Institute for Democracy ‘Societas Civilis’ and Member of BiEPAG. He emphasized that resolutions of bilateral issues give the necessary strength and courage for resolving other issues.

“In order to avoid, as much as possible, interruptions and different reading of the agreement from one side, and to have the EU on board, it is important to place the implementation of the Prespa agreement within the negotiation framework. This could also be kind of buffer for any kind of damaging/destructive actions taken by any of the two governments in the future. Several governments in both countries will come to power in this long implementation period, some of them, wanting or being tempted to exploit the issue for domestic political purposes”, stated Nečev.