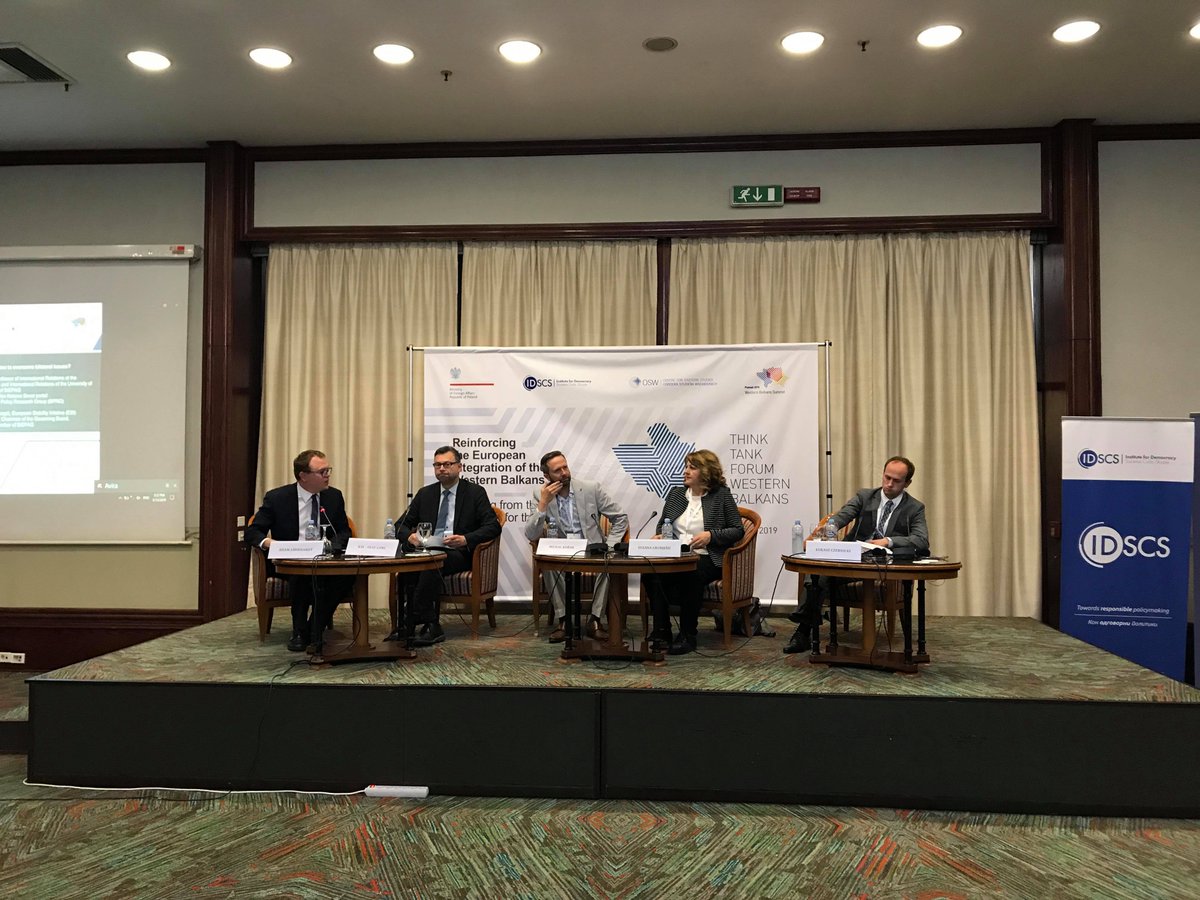 Key topics of the discussion were related to the Berlin Process in the context of the Polish presidency, such as regional cooperation, security, migration, EU integration of the Western Balkan countries and overcoming bilateral issues.

“The Berlin Process losses its potency if the EU enlargement is not credible enough. The EU doors must be open for the Western Balkan countries,” pointed out the president of the Institute for Democracy ‘Societas Civilis’ (IDSCS) Marko Troshanovski in his welcoming remarks.

Speaking about the regional relations, Deputy Foreign Minister of the Republic of North Macedonia Andrej Zhernovski said that “there are no frozen conflicts, but only frozen solutions.”

“We would not change and cannot change our path. In order to reinforce our future, we need to have good neighbourly relations and regional cooperation,” he said.

Zhernovski added that they understand the importance of the reforms, adding that the integration process is more transparent than before.

“We hope that in June we will have a positive message and we will start the accession process. We are more than ready to start off the new phase. With the Prespa Agreement, we did a big step forward. If the EU does not reward our efforts, it will lose much credibility in the region and it will send the wrong message to both reform-oriented and authoritarian rulers in the Western Balkans,” explained Foreign Minister Zhernovski.

Deputy Foreign Minister of the Republic of Poland, Szymon Szynkowski vel Sęk, Plenipotentiary for the Western Balkans Summit, underlined the importance of the topics which will be brought up at this forum because it will serve as good preparation for the upcoming Summit in Poznań.

“I believe that the bottom-up approach of the EU integration is the right direction. Topics of today and tomorrow will be presented in Poznań this year. Your strong voice will have a chance to influence the decisions. Your policy paper will be read, your presence will be noted and your questions answered,” said vel Sęk.

The significance of the topics which will be discussed at this two-day event was also underlined by the Deputy Director-General of the Directorate-General for Neighbourhood and Enlargement Negotiations (DG NEAR) Maciej Popowski.

“The perspective is clear, next steps are clear, too. We just need to work hard in different formats and configurations to make it happen,” said Popowski.

Instead of simulating the enlargement, there should be more concrete measures

There are few elements which have spread the scepticism towards the EU perspective, said Kai-Olaf Lang of the German Institute for International and Security Affairs.

“I believe that enlargement is a success. Why is there enlargement fatigue? Because the benefits of the enlargement are not distributed equally. The EU policy is to keep the club together rather than bring in new members. We also have a selective perception of the past enlargement rounds,” pointed out Kai-Olaf Lang, adding that the EU has experienced securitization because of the eastern members and their own issues.

Kai-Olaf Lang thinks that instead of simulating the enlargement, the EU should start creating more concrete measures.

The Head of the Strategy Analysis team at the Polish Economic Institute Łukasz Czernicki gave an overview of the Polish experience regarding the accession process and benefits in the economic terms.

He pointed out that joining the EU is joining the certain area of legal standards which attracts much more foreign investors, which further leads to economic dependence of foreign capital.

“There are two things Balkans countries can benefit from entering in the EU but first, they have to try to attract these foreign direct resources and to develop their local companies in order to compete with these foreign ones,” Czernicki concluded.

Michael Kořan, the Board President of the Global Arena Research Institute, thinks that we are in the period of redefining what Visegrád Group really is.

“Visegrád Group is kind of an empty box, it can be whatever you want it to be and it facing a period where they are discovering what will it be,” said Kořan.

Grubješić: Regional cooperation is important, we need to improve it

In the light of that, the Secretary-General of the European Movement in Serbia Suzana Grubješić pointed out that things have changed since these countries became the EU members.

“The EU has changed, the enlargement process and Western Balkans also, but there are some things that can be learned from this, such as regional cooperation, which I believe is very important,” pointed out Grubješić.

She also put an emphasis on bilateral issues in the Western Balkans.

“We need to improve our cooperation like Visegrád Group, we need our neighbours in the Western Balkans. It is important so we can catch up with other EU member states,” added Grubješić.

However, she argued that in Visegrád countries existed the consensus in joining the EU and NATO, something it cannot be said for all Western Balkan countries. “Regarding Serbia, the support towards the EU is lower and it is around 50%, while the support towards NATO membership runs below ten per cent,” stressed Grubješić.

When it comes to the Berlin Process, she explained she considers it to be a positive model, but it is not a substitute for the EU accession.

Grubješić concluded by asking why has the EU Commission postponed the progress report. “Why is there such an atmosphere of the EU enlargement that no EU politician dares to even mention the word and even the EU Commission has postponed report?” she asked.

Maciej Popowski stated that policy regarding the Western Balkans will not change during this EU Commission mandate.

“We do not want to import any bilateral issues. Let me be very clear, all the bilateral issues need to be resolved before the EU integration of the region,” pointed out Popowski.

Matteo Bonomi, Research Fellow at the Istituto Affari Internazionali, thinks that the EU does not have the instruments to transform the region. He also believes there is no sustainable status quo in the region.

“The lack of progress in the past period makes things worse. The region also has the ecological and demographic issues that will have economic and political consequences. So, the less the Balkans are relevant, populated, contented – more the failure of the EU action in the Balkans will be bombastic,” said Bonomi.

He stated he hopes the EU will open the accession negotiations with Albania and North Macedonia.

That there are some questions, which need to be answered by both the EU and the candidate countries, so both sides could be sure they have something in common, pointed out the Editor-in-Chief of the Euinside Adelina Marini.

“The answers to these sorts of questions are very important for the EU. If you imagine that enlargement stays the same in the next 10 years, and all of the Western Balkan countries join the EU, then the fragile democracies in the EU would be in majority. What will happen then?” asked Marini.

Nechev: Commission needs to take the lead of the accession process

The Head of the Centre for European Integrations of the Institute for Democracy ‘Societas Civilis’, Zoran Nechev said that the Balkans needs to reflect on the past in order to reinforce the future. In addition, he said that the EU needs to change its procedure, especially when it comes to the accession process, allowing more qualify majority voting. This way, he believes, member states would still be involved, but not in this format.

“The Commission needs to take the lead of the accession process and finish unification of Europe. Member states should be involved, but not in the way they are at the moment – only at the end of the process. Commission Hahn was responsible for European Neighbourhood Policy and Enlargement Negotiations which was covered by Federica Mogherini, as well. Looking at his agenda we can see the Western Balkans was among his priorities, which has been shown by the number of his visits to this region,” underlined Nechev.

Senior Research Fellow of the Hellenic Foundation for European & Foreign Policy and Assistant Professor of the University of Macedonia Ioannis Armakolas made an overview of the situation between Greece and North Macedonia.

“Greece has never hidden the fact that it wants to use its EU membership to resolve bilateral issues. Resolving the name dispute was the absolute condition for North Macedonia joining the EU”, explained Armakolas.