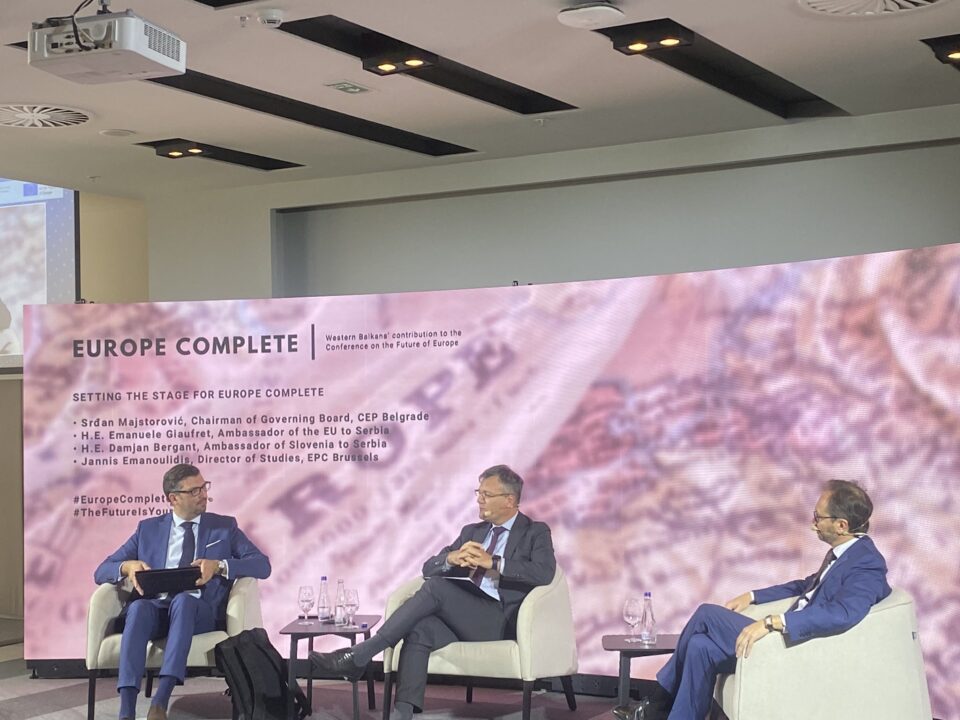 BELGRADE – Proposal of a phased membership of the Western Balkans, which would try to solve the problem of the enlargement that is currently “not not achieving the desired effects”, as well as the geopolitical importance of the Western Balkans for the EU, were discussed at an event “Europe Complete”, held in Belgrade today.

One of the keynote speakers, Slovenia’s Ambassador to Serbia, Damjan Bergant, pointed out that Slovenia had put the enlargement high on the agenda of its EU presidency.

He added that Slovenia’s position is clear, and that is that it wants the countries of the Western Balkans to be a part of the Union because they share a common history, culture, and values.

„I come from a country that relatively recently joined the EU and I have the experience of living in Slovenia when it was not part of the EU, and now when it is, I feel different. I want the citizens of the Western Balkans to feel that, and that is why the EU must be completed by joining of the Western Balkans“, Bergant said.

The head of the EU Delegation of the European Union to Serbia, Emanuele Giaufret, stated that the policy of EU enlargement to the Western Balkans has no alternative.

The pandemic has shown that we are stronger together, said Giaufret, noting that the EU and the region are facing the same challenges.

Srđan Majstorović, Chairman of Governing Board CEP,  as well as a member of Balkans in Europe Policy Advisory Group (BiEPAG) assessed that the process of EU enlargement is not achieving the desired effects.

He stated that with the progress in fulfilling the conditions for joining the EU, the candidate countries will gradually move from one phase to another and thus make concrete progress.

„It is a process based on rewards for more successful and strict control of those who lag behind in that process“, stated Srđan Majstorović.

Janis Emanuolidis, Director of Studies at the European Policy Centre in Brussels, assessed that the Conference on the Future of Europe is an experiment at the European level, which has its own advantages and disadvantages, as well as challenges. It is, however, encouraging, he said, that citizens are involved in the process.

„CSOs and European Policy Centre, as one of them, are trying to include the citizens structurally in the Conference on the Future of Europe, not just as observers“, says Emanuolidis.

During the first panel, a Discussion paper prepared by researchers from European Policy Centre and CEPS was presented, proposing the adoption of the staged process of accession to Western Balkan countries to the EU.

According to the authors, the paper sets out a substantial institutional, technical and legal basis for a breakthrough out of the current impasse of the enlargement process.

They added that the implementation of the system of staged accession would have to be supplemented by a robust EU policy geared towards the resolution of bilateral disputes and issues of statehood in the region.

„The EU’s institutions could well lend themselves to the idea of staged membership, with various examples or precedents to be noted, also connecting with the related idea of ‘differentiated’ integration“, the authors stressed.

Tanja Miščević, Deputy Secretary-General at Regional Cooperation Council (RCC) said that it remained unclear how staged membership offered practical benefits to the citizens of the Western Balkans, adding that full membership must remain a priority.

According to Miščević, one of the main goals of the accession process is the possibility of participating in the creation of European policies, and a participation without the right to vote or with fewer rights than other member states is not membership.

Milena Muk from Institute Alternativa reminded that, even though Montenegro is formally labeled as a „frontrunner“, after 9 years only three chapters were closed.

She assessed that the enlargement process is in a limbo and that countries, like Montenegro, which have made the most progress in that process, are currently not making process.

„We are in limbo and not progressing, therefore, staged membership is a good idea“, Muk said.

The second panel discussion addressed the topic of Building Europe’s Strategic Autonomy in general terms and with regards to the Western Balkans.

Velina Tchakarova, Director of the Austrian Institute for European and Security Policy in Vienna, warned that the direct vicinity of the EU is more or less turning into a ring of fire, and this has to be addressed not only by soft power but also hard power.

In her view, the Europe was in danger of slowly but surely turning into geopolitical backyard of the 21st century, and that the populist movements on the continent are caused by a squeezed European global perspective.

When it comes to the issue of enlargement, Tchakarova assessed that it was the most successful peaceful integration by external actors, and that she saw the Western Balkans in that sense as well. She recommended pressuring local political elites to do their homework regarding the necessary reforms, as well as more strategic communication about EU’s geoeconomical role in the WB.

Dejan Jović, Professor at the Faculty of Political Science at the University of Zagreb and a BiEPAG member, said that the EU would fail to become a powerful global actors do that if it doesn’t enlarge immediately to the Western Balkans.

“I am not optimistic enough about Europe’s strategic autonomy, but I am thinking that it must do that if it wants to become a global player”, Jović said

He said that EU needed to change its hesitation towards the Western Balkans and to  treat the region as a whole and remove the criteria that nobody can fulfil.

Srđan Cvijić, expert in democratisation, public and international law and political analysis and another BiEAPG member, said that the EU should draw the line in the sand, define its own Monroe doctrine and send message that the Western Balkans is its own turf.

“But also, it should recognize that rules-based international order is not threatened by Russia and China as much as it is by the home-grown populists. Four years of Trump or Le Pen victory in France would be more threatening to it than anything Russia and China would do. EU needs to go against autocrats within its own borders, such as Hungary”, Cvijić said

EU needs to project its power in the Western Balkans, Cvijić assessed, adding that this should be the starting point of its geostrategic agenda.

“Building Europe Together“: WB contribution to the Conference on the Future of Europe to be discussed on Monday