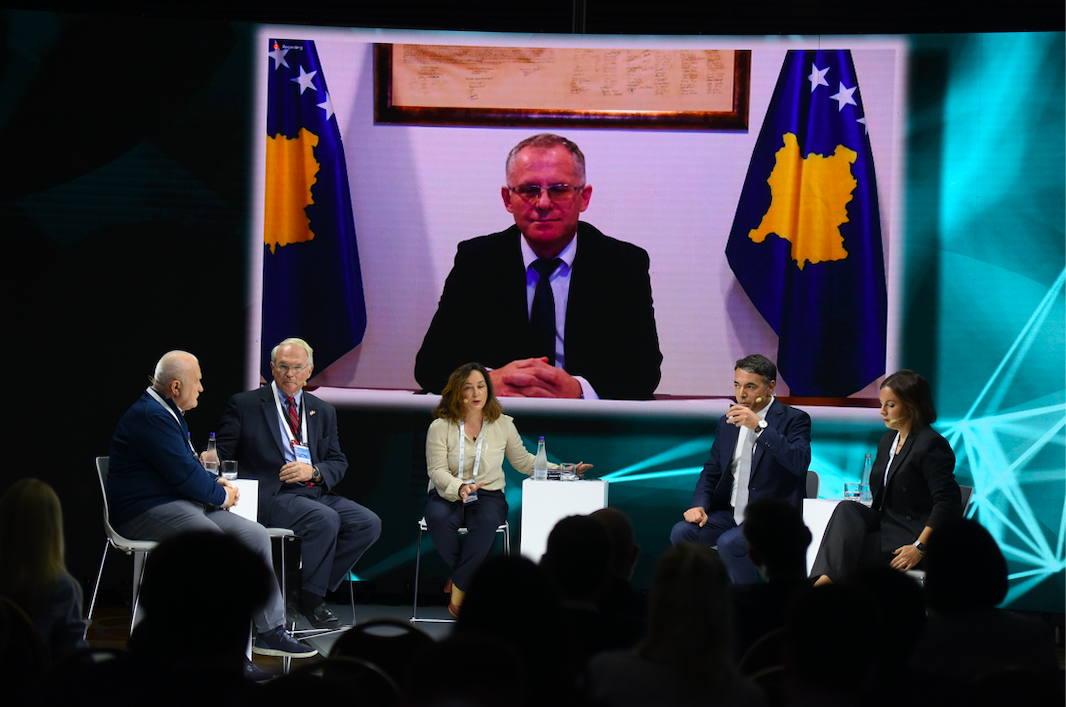 Variety of topics and problems were discussed on this panel, from licence plates in Kosovo to the Franco-German initiative regarding Kosovo-Serbia dialogue.

Besnik Bislimi, First Deputy Prime Minister in the Kosovo Government, talked about the last decision of the government of Kosovo to not start with immediate measures after the deadline on the car plates conversion from illegal to legal, but to have transitional stages, from warnings to fines. Bislimi stressed that “we didn’t choose the issues. The issues chose us.”

‘’Our interest from the beginning was broader picture and comprehensive normalization of relations between Kosovo and Serbia, but we don’t want the same thing’’ explained Bislimi.

When asked about the Franco-German initiative and the position of the US, Ambassador Christopher Hill said that the US has been clear in its desire to support the EU and particular France and Germany to find the more comprehensive result to the Serbia-Kosovo problem.

Hill also mentioned that people always talk about Serbia moving west. ‘’We would all like for Serbia to move west, but we would also like west to move to Serbia’’, said Hill.

US Ambassador stressed that he is disappointed regarding the issue of Kosovo because “bizarre questions are allowed to suppress the important ones because they are not as fun as the one about the license plates”.

“Our aspiration should be whether there is a future for the Serbian community in Kosovo, not about the license plates and what are the aspirations and what are the rules. We have allowed the important issue to pushed to the side”, said Christopher Hill.

He also said that he would like the head of the negotiating team in the dialogue with Belgrade to be Besnik Bisljimi in Belgrade and to participate in the conference as planned, but he pointed out that “even the Serbian negotiator has problems when he goes to Kosovo.”

Dušan Janjić, Founder and President of the Executive Board of Forum for Ethnic Relations, expressed hope that the new Serbian government will accept duties to recover the Belgrade-Pristina dialogue and to cooperate with KFOR in order to eliminate the risk of conflict. According to him, only the spirit of two Germanys – the spirit of normalization can help to break the deadlock. “The best opportunity will not come, we need to recognize that Kosovo exists and then solve issues with our neighbour”, concluded Janjic.

“Bilateral disputes that are emotional defocus the real problems” pointed out Nikola Dimitrov, former Minister of Foreign Affairs of North Macedonia. He added that without neighbours, countries cannot win, so the Western Balkan countries have to get out of the trenches of history and turn to future regional cooperation and European integration.

Talking about lessons learned from the conclusion of the Prespa agreement, Dimitrov stressed several important factors in resolving long-lasted disputes that could help in the Belgrade-Pristina dialogue, such as mutual trust, facing reality, taking responsibility, and stopping the blame game.

Jovana Radosavljević, Executive Director of New Social Initiative concluded that we are missing the good fate in parties, and without the good fate, we don’t see the possibility of finding the agreement that is durable and sustainable. She added that the parties need to take into the consideration the needs of the communities.

‘’We are going to be living the consequences of these agreements and the agreements really need to make our lives easier’’, stated Radosavljevic.