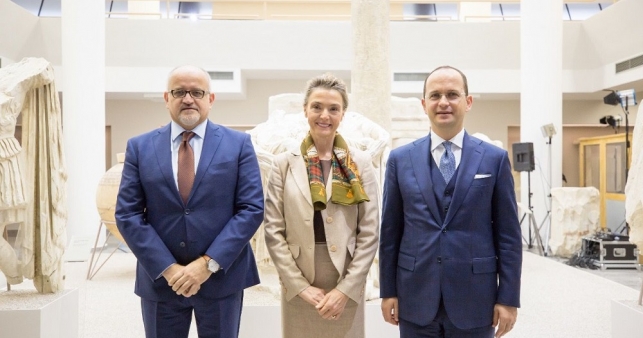 TIRANA – Cooperation and coordination of Adriatic countries in the field of security as well as the national and regional initiatives in infrastructure, energy and tourism were discussed at a trilateral meeting between the Foreign Ministers of Albania, Croatia and Montenegro.

The second trilateral meeting of the Foreign Ministers of Albania, Croatia and Montenegro was held on Friday at the initiative of Albanian Minister for Europe and Foreign Affairs, Ditmir Bushati.

This platform which was launched in the first meeting of the Foreign Ministers of these countries in February this year in Split, Croatia serves the joint efforts for consolidation of cooperation in Adriatic-watered Europe as well as the drive in the interest of a safe region interconnected at all dimensions.

The emphasis was put on the progress and interaction for advancement of strategic projects, such as: the Adriatic-Ionian Corridor and the gas pipeline that will connect Trans-Adriatic Europe with Croatia via Albania, Montenegro and Bosnia Herzegovina but also on cooperation in the field of tourism and environment.

Membership of Montenegro in NATO last spring, apart from the European belongingness of our countries transformed this part of the Western Balkans in the Adriatic NATO, contributing to security, stability and prosperity of our region.

In his remarks, Minister Bushati appreciated the cooperation in this trilateral format and reaffirmed the role of Albania in coordination of our countries in areas of common interest.

The trilateral meeting involving Albania, Croatia and Montenegro is a good example of how like-minded countries join their efforts to synergize the regional agenda as well as to reinforce their response to internal challenges and those imported from the hot spots.
At the end of the meeting, the Foreign Ministers highlighted the need to extend our trilateral platform of cooperation to senior representatives and experts in areas of interest in order for the ideas and proposals brought up in the trilateral to materialize and translate in initiatives and concrete actions.